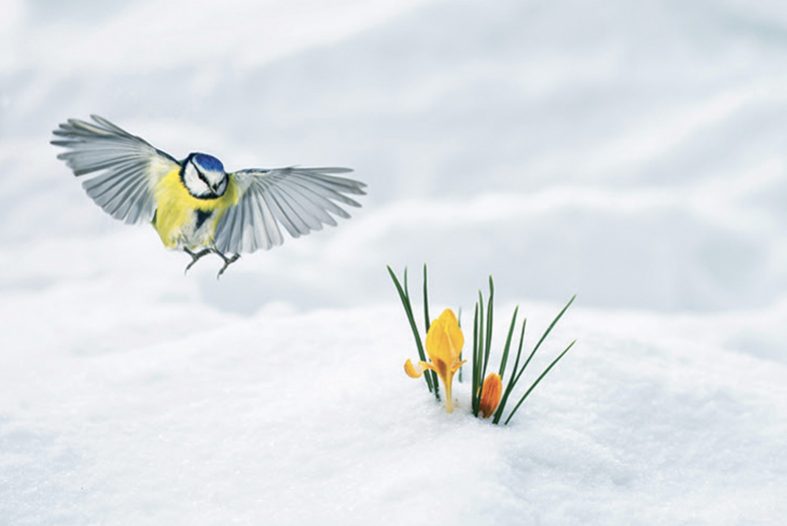 Springtime in Asheville is subtle. There’s no accumulated snow to melt and temperatures have been in the 60s for weeks. Daylight lasts longer, and restaurants require reservations again. Robins started appearing in early March and tourists arrived soon afterward. By the time the spring equinox rolls around, residents in the Paris of the South have traded their long pants for shorts and shoes for sandals. Bridal party weekenders will begin clogging the sidewalks in April.

I’m thinking another spring might have finally arrived, one which follows two years of a gloomy, dark winter.

The first flurries appeared early in 2020, with reports of a new, highly contagious and lethal virus originating in China. Health care facilities around the world were quickly overwhelmed, and governments attempted to slow its spread with mask mandates, social distancing, and business shutdowns. Several innovative medical treatments evolved and were tested with mixed results. Vaccines and boosters were developed, approved, and utilized in breakneck speed. Optimistic opinions for an end to the national blizzard sprang up like crocuses in unseasonably warm February weather.

But the cursed winter remained like snow piles in Michigan’s Upper Peninsula. The virus mutated into the more contagious and more deadly beta and delta variants. The hot months of July and August of 2020 were supposed to tamp down its transmission, but the country still experienced waves and spikes. COVID-19 started being compared to the Spanish Flu pandemic of 1918–20.

I think—I hope—crocuses are re-emerging. Widespread vaccinations, boosters, acquired immunity, and previous deaths have shrunk the at-risk population. Graphs of the aforementioned factors display favorable trends, positive test rates have decreased, and the hot months of July and August beckon seductively. These encouraging signs suggest our national winter may have subsided.

However, the delta spike in July 2021 proved prior optimistic projections wrong, confirming extrapolations in March and April are doubly dangerous. Despite recent reassuring experience, omens of an unseasonable reversion are materializing. The omicron variant blew through the U.S. during the last few months, crowding out previous versions of the virus. An omicron mutation, BA.2, is emerging as this column is being written and is becoming the dominant strain in North America.

Developing data suggests this variant is more contagious than the original omicron but might not inflate mortality rates above current levels. A more contagious variant could mean a quicker, higher peak, but might also presage a steeper decline with fewer people the disease can infect, hospitalize, and kill.

For comparison, annual influenza deaths in America ranged from 12,000 to 51,000 over the past decade. America’s health care community encourages annual flu shots, which depress the death count. At the risk of an incorrect epidemiological analysis, about 30 types of seasonal influenza exist. The annual flu shot protects us from the three or four most prevalent strains expected each winter, leaving us vulnerable to the remaining types of influenza.

In contrast, COVID-19 has a relatively small number of variants, and current vaccines appear to provide protection against all types of the illness—at least so far. Annual COVID vaccinations may become as common as winter flu shots. Before hopes rise too high, COVID will still cause thousands more deaths in 2022 and later. These deaths may rival seasonal influenza deaths, but any reduction would be a dramatic improvement over the COVID deaths in the past two years.

Is our long national winter ending? Do you see crocuses pushing through the ground?