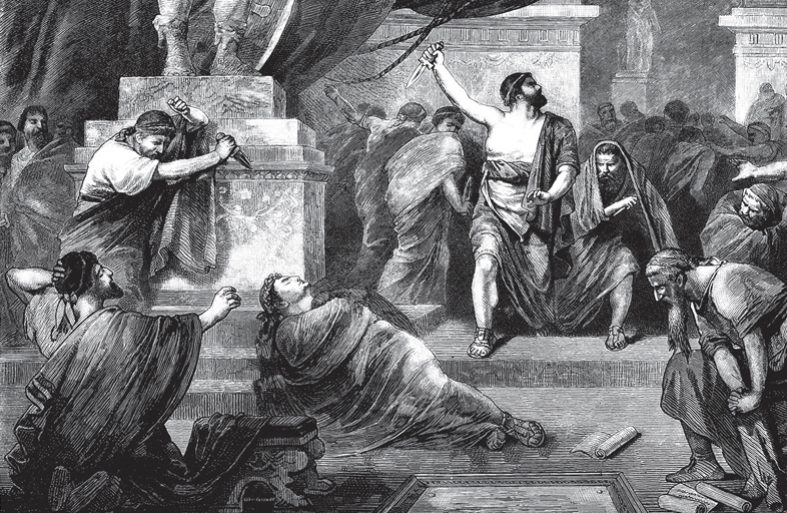 It is mid-March as I sit composing this column. All these problems have a connection, possibly tenuous, to March. For example, my mathematical calendar for today has the following cryptarithmetic puzzle.

In this puzzle each letter represents a base-10 digit. No letter can represent more than one digit and no digit can be assigned to more to more than one letter. There are no leading zeroes. There is only one solution.

It is certainly possible to use a computer to solve this problem. Indeed, using it as a mere calculator is probably the right thing to do to check your work. However, I would like to see you find the answer by using some logic and less than a dozen checking calculations. Showing that the answer is unique will take a little more work but can still be done without a full-blown program.

My son, the philosopher, visited us from Athens this month. (I did say the connection to March was tenuous.) He has a much broader vocabulary than I do, so does much better than me on Wordle. While he was here, he introduced me to an arithmetic version of Wordle called Nerdle. In Nerdle, one needs to guess an equation rather than a word. Equations are eight elements long with elements from the set {0 1 2 3 4 5 6 7 8 9 + − * / =}. Guesses must be valid base-10 equations, contain one and only one“=”, and can only have a number to the right of “=”, not another calculation. Standard order of operations applies so * and / apply before + and −. For example, 3 + 2 × 5 = 13 is an acceptable guess. Color coding of guesses is like Wordle—that is, one color for a correct element in the right place, a different color for a correct element in the wrong place. The following might get you started on Nerdle.

Create two Nerdle guesses, which combined use all the elements and will tell you exactly where “=” is located.

Still basing these problems on a tenuous connection to March:

What is the smallest positive integer n such that

In order to make the solver list, your solutions must be received by June 1, 2022.

Solution to previous puzzle: Down Broadway

Question 1: Assuming our meetup point is a three-digit number, where on Broadway did our run begin, and where did Doc turn around?

It turns out that there were lots of different interpretations to the problem, and I did my best to accept all reasonable assumptions. For example, some solvers assumed that both Doc and the group only summed the turn-around point once, and not both directions, while other solvers had both the group and Doc start on an exact address, and not between 2 numbers. Slightly changing the assumptions can drastically change the solution! As intended, if Doc and the running group starts between 204 and 205 Broadway, then the sum of the addresses in both directions for the main group is 204+203+202+…+2+1+1+2+…+203+204=41,820. Similarly, if Doc starts at the same place and runs up until 288 Broadway, then 205+206+…+287+288+288+287+…+206+205=41,820. Hence the group started between 204 and 205 Broadway. This is the only 3-digit number where this property holds.

Question 2: Assuming there is equal distance between each address, in percentage terms how much farther did the group run compared to Doc on today’s run?

The group ran 407 blocks (203.5 blocks in each direction when one excludes the starting point), while Doc ran 167 blocks. Therefore Doc ran a little over 41% of the distance of the main group—not a bad effort!