The ABCD Goes to the Movies 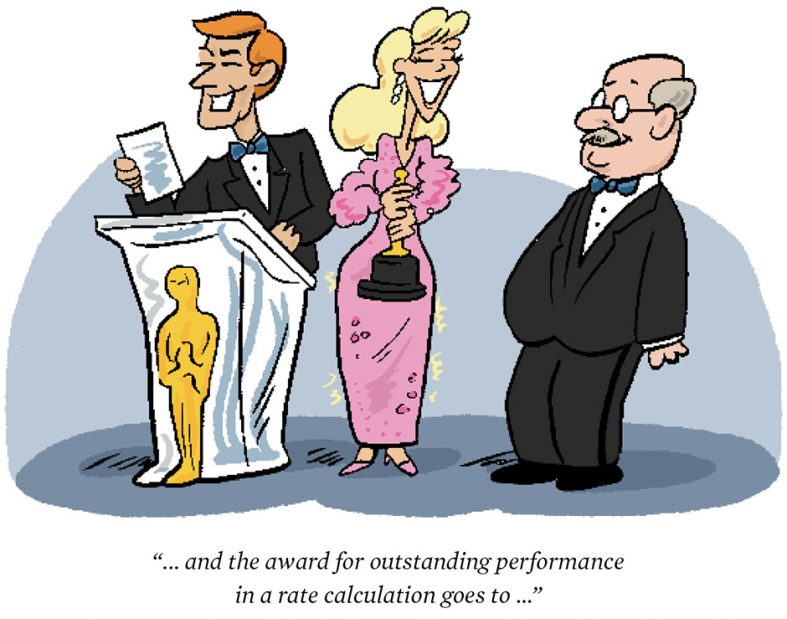 Portrayals on stage or screen of actuaries often attract a lot of interest within the profession. Many will remember the 2002 film About Schmidt (loosely based on a 1996 novel of the same name that was not about an actuary). Many of us are also familiar with the 1976 BBC film Billion Dollar Bubble, which is based on a true story of a corrupt insurance enterprise and has long been used in ethics training in the profession. My favorite cinematic portrayal of an actuary is found in a somewhat ridiculous and obscure film of the late 1940s that has received surprisingly little attention in the profession considering that its lead character is an actuary with a professionalism issue.

Are You with It? is a 1948 musical whose stars are likely unfamiliar to anyone not yet collecting Social Security: Donald O’Connor, Olga San Juan, Martha Stewart (no, not that Martha Stewart), and Lew Parker. O’Connor plays Milton Haskins, a young, Harvard-educated actuary employed by the Nutmeg Insurance Company of Hartford. A mathematical genius never known to make a mistake, Haskins has forecast with great exactitude the date he is likely to become the president of Nutmeg and the number of pickets in the fence that will surround the house he will inhabit when he marries his fiancée, whom he addresses (with characteristic actuarial rectitude) as “Miss Reilly.” His meteoric rise is suddenly halted when it is revealed that he has misplaced a decimal point in a rate table, necessitating its recall from Nutmeg’s agents. Humiliated, Haskins flees Nutmeg’s offices and within a few hours has joined a carnival called “Acres of Fun,” where he is able to deploy his actuarial talents in, among other activities, tap dancing (which, he explains, is merely an exercise in applied mathematics), weather forecasting, and predicting the likely outcome of the spinning of a roulette wheel. By the time the credits roll, Nutmeg wants Haskins to resume his actuarial duties, but he wishes to remain with Acres of Fun. Thanks to some preposterous plot twists, he is able to do both. Those interested in learning how this is possible will have to watch the film, which at this writing is available in its entirety at no charge on YouTube.

Milton Haskins’s tale has a happy ending, but it was set in a time when actuaries did their work very differently from the ways in which they do it now. Moreover, Haskins’s decision to leave Nutmeg and the actuarial profession for a carnival was his idea, not one forced by his employer or by a disciplinary action of the actuarial profession. Because Are You with It? predates the establishment of the Actuarial Board for Counseling and Discipline (ABCD) by over 40 years, the absence of any mention of professional discipline from the story is only logical. But suppose the profession’s current disciplinary structure had been in place in 1948, and someone (a jealous workplace rival—someone of the same stripe as Bud Frump in How to Succeed in Business Without Really Trying, for example) decided that Haskins’s misplacement of a decimal point was sufficient grounds to make a complaint against him. A consideration of the process that would ensue brings up a number of aspects of the profession’s disciplinary rules and processes that are worth reviewing.

First, for a complaint against Haskins to go forward, a possible material violation of the Code of Professional Conduct would have to be identified. A serious error in a calculation would most likely be alleged to be a violation of Precept 1, and specifically of Annotation 1-1’s requirement that an actuary “shall perform Actuarial Services with skill and care.”

Second, Precept 13 indicates that someone who contemplates making a complaint has a couple of issues to consider before proceeding. Specifically, an actuary “with knowledge of an apparent, unresolved, material violation of the Code by another Actuary should consider discussing the situation with the other Actuary and attempt to resolve the apparent violation” before filing a complaint. This raises additional issues:

Is the matter unresolved? Perhaps the recall of the defective rate table resolved it. On the other hand, did its release indicate an egregious level of carelessness in Haskins’s work? Certainly, all actuaries make mistakes, but if the error is one that could have been spotted easily (as suggested by the speed with which Haskins finds it when he is alerted that there is a problem with his table), were actuarial services provided with adequate skill and care in this case?

Does the matter involve a material violation of the Code? Lest there be any misunderstanding of the meaning of that term, Annotation 13-1 tells us: “A violation of the Code is deemed to be material if it is important or affects the outcome of a situation, as opposed to a violation that is trivial, does not affect an outcome, or is one merely of form.”

Haskins’s response to the complaint will be reviewed by the ABCD chair and vice chairs. If he persuades them that the matter does not entail a possible material violation of the Code, the complaint will be dismissed. Otherwise, they will propose an investigator to look into the matter and report on it to the ABCD. Investigators are actuaries with substantial experience in areas of practice covered by complaints. If Haskins believes that the proposed investigator is biased or otherwise unqualified to serve, he may file an objection with the chair and vice chairs, who will propose a different investigator if they determine Haskins’s objection is well-founded.

When the investigator’s report is complete, it will be forwarded to Haskins for a response. Along with the initial complaint and the subject actuary’s response, the report and response will be shared with the entire ABCD. The ABCD will then vote to dismiss the complaint, to dispose of the matter through counseling, or to hold a hearing on the matter.

A couple of observations on the options of dismissal and counseling are in order:

Dismissals are made with or without guidance. Dismissal with guidance is still a finding that a material violation of the Code did not occur. The guidance is merely unsolicited advice from the ABCD regarding the matter that gave rise to the complaint.

Disposal through counseling may or may not entail a finding by the ABCD that a material violation of the Code has occurred. Counseling is chosen when the ABCD decides that a matter is better handled by a discussion with the subject actuary than by disciplinary against him or her. Counseling may be given in writing, in person, or both. A confidential record is kept of counseling, and if the counseled actuary is the subject of a subsequent complaint relating to the same issues, the fact that he or she was counseled earlier may be taken into consideration by the ABCD.

If the ABCD decides to hold a hearing, Haskins and the investigator will be asked to appear. Haskins is allowed to bring legal counsel, who may advise the actuary but may not directly participate in the proceedings. A court reporter will be present to take a transcript. Haskins and the investigator will be invited to make presentations. The members of the ABCD will be able to question the investigator, as will Haskins. ABCD members may also pose questions to Haskins. When the questioning concludes, Haskins may make a closing statement. The ABCD will then go into executive session to decide whether to dismiss the complaint (with or without guidance), dispose of the matter via counseling, recommend discipline, or seek more information.

The possibility of public discipline suggests that the case of a real-life Milton Haskins might not have had as happy an ending as Are You with It? but as Haskins would likely be quick to point out, the chances are good that it would. Only about 9% of the complaints filed with the ABCD in the years 1992–2018 resulted in recommendations for disciplinary action. The majority of complaints result in dismissal, which is one of the reasons why those contemplating the submission of a complaint are encouraged by Precept 13 to have a conversation with the potential subject of the complaint before proceeding.

The outcomes of accusations of serious error or misconduct among our members will rarely be as amusing as Milton Haskin’s impromptu move to the carnival industry, but worse things could happen to us as a profession than to have the notion of an actuary joining a carnival continue to be regarded as an improbable and amusing event. The Code of Professional Conduct and the disciplinary protocol followed by the U.S. actuarial organizations whose members are subject to the Code work to foster happy endings that would please even the toughest critic.

DAVID DRISCOLL, MAAA, FSA, FCA, EA is a member of the Actuarial Board for Counseling and Discipline.