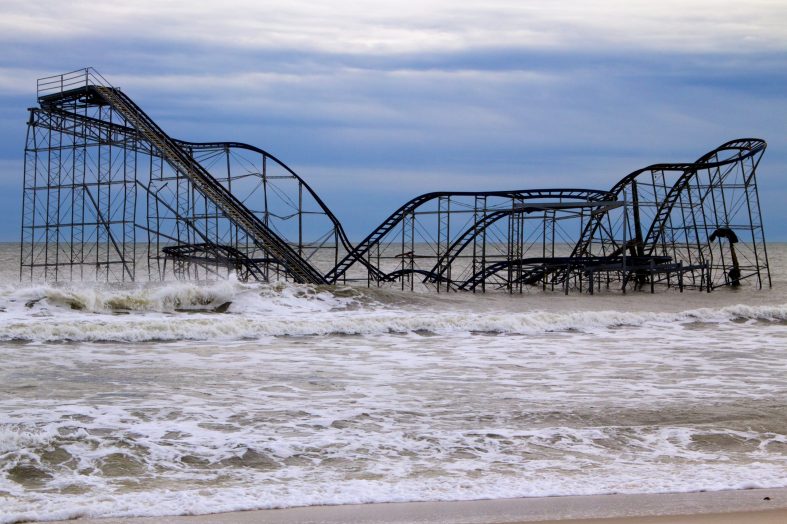 Why America’s coasts are stuck in cycles of disaster

A decade ago, Hurricane Sandy pummeled the coast of New Jersey, drowning houses and humans as it did. Before making landfall in the United States, the superstorm also bowled through the Caribbean. Torrential downpours, widespread flooding, and aggressive winds killed over 200 people and caused about $70 billion in damages.[i] But anyone who thought Hurricane Sandy was a once-in-a-lifetime storm would be proved wrong five years later, when hurricanes Harvey and Maria caused over $100 billion in damages—each. Or one could simply look back to the atrocity that was Hurricane Katrina, which remains the costliest storm of all.

When Sandy hit, the U.S. was still recovering from the man-made disasters of the Great Recession. But to call hurricanes “natural” disasters is misleading—not only because rising sea levels, which raise the baseline for any flooding caused by a hurricane, are at least partially the result of anthropogenic climate change. The dollars and cents of any “natural” disaster are proportionate not just to the physical size of the storm, but to the extent of development in any areas it levels. Coastal development hasn’t just continued, even in the wake of superstorms. It’s been subsidized by the federal government.

Spurred by the Storm

In 1962, a half-century before Hurricane Sandy made landfall, an even larger storm damaged 70,000 houses along the East Coast. The disaster would come to be known as the Great Ash Wednesday storm. Damages, in today’s dollars, would tally just $2 billion. But property along the shore of New Jersey was worth just $1 billion when the Great Ash Wednesday storm hit. Today, that figure has multiped by 100. Tally the value of all coastal property in the U.S., and you hit $1 trillion in no time.[ii]

After the Great Ash Wednesday storm, an influx of federal disaster relief led to a historic surge in development. That year, a congressman from New Jersey also introduced legislation that would, in theory, offer reasonably priced flood insurance to coastal homeowners in exchange for more careful development. The bill passed in 1968, but the latter part of the deal fell by the wayside, leaving the federal government’s newly minted National Flood Insurance Program (NFIP) with a mandate to insure even the riskiest properties without the addition of a steep premium. In the 1950s, the federal government funded 5% of rebuilding after hurricanes. Today, that figure is closer to 70%.[iii] While recent decades have been largely marked by the privatization of risk in other spheres, the growing dangers of coastal living offer a notable and concerning exception.

Unsurprisingly, the losses have been tremendous.[iv] The Great Ash Wednesday storm, journalist Gilbert M. Gaul explained in The Geography of Risk, served to “instill a growing expectation among Americans that the federal government would always be there to rescue them after hurricane.”[v] This cycle, he added, represents “one of the most costly and damaging planning failures in American history.” Currently, the NFIP owes the U.S. Treasury over $20 billion—and that’s after the recent cancellation of another $16 billion.[vi] “If federal flood insurance were a private program, and not a government-backed program with the U.S. Treasury serving as a backdrop,” Gaul wrote, “regulators would have declared it insolvent years ago.[vii]

Looking for a Way Forward

The government has been trying to work its way out of this situation. In 2012, the Biggert-Waters Reform Act was passed. The bill phased out grandfathered flood insurance rates and called for the NFIP to transition from heavily subsidized rates to actuarially sound ones.[viii] But just two years later, such progress was reversed. Two bills, pushed by homeowners and real estate agents, were passed to restore grandfathering, cap increases, and reinstate subsidized rates.[ix] Another suggested reform is the addition of a deductible at the local level, so federal aid would only kick in after a certain amount of local relief spending had been met. This would make local municipalities—which control zoning decisions and are generally biased toward rebuilding—have skin in the game when disaster strikes.

Others believe the only true solution is a gradual retreat inland. By 2050, there will be about 200 million climate refugees worldwide.[x] But leaving is not as simple at it may sound. In 2017, the New York Times spoke to a woman struggling to sell her coastal home due to rising cost of flood insurance.[xi] She was underwater on her home, a financial metaphor—at least for now.

Further disaster is only a matter of time. By some accounts, global sea levels are expected to rise several feet by 2100.[xii] But because the rate of rise is also increasing, some experts believe even that dire prognostication could be too rosy. Still, the consensus is simple: Coastal disasters are not a matter of if, but when. In the coming half-century, annual losses associated with hurricanes are slated to grow faster than the U.S. economy.[xiii] And more likely than not, it will be U.S. taxpayers who foot the bill.

The Academy has numerous resources on this topic for interested readers.

ALYSSA OURSLER is a freelance journalist.

print
Next article You Are Multilingual!
Previous article An Actuary Takes on Wordle