This issue’s puzzle was created by Bob Fink and Jerry Miccolis, two of my regular test solvers. For this one, Eric Klis and I served as test solvers, and we made some editorial suggestions.

For the most part this is a standard double acrostic puzzle, with all the clues being cryptic clues. Once complete, the grid will spell out a Presidential quotation. The first letter of each clue answer, when read top to bottom, will spell out the name of the speaker and the source of the quotation. There are no proper nouns, uncommon words, or variant spellings, and all words are playable in Scrabble. As always, beware of punctuation in the clues, which may be misleading.

There is, however, a wrinkle. There is one extra letter space in the set of letter spaces following each clue. These extraneous spaces, each of which occurs immediately following the first vowel (a, e, i, o, u, or y if used as a vowel) in each clue answer, correspond to grid squares which should be blackened-in; doing so will reveal an image relevant to the quotation. Note that these blackened-in grid squares serve no other purpose and may interrupt words in the quotation.

Should you need them, you will find two hints following the clues. The first hint provides the length of each word in the quotation (which may be useful for double-acrostic solving), and the second provides the grid location of each of the extraneous, blackened-in grid squares.

In order to make the solver list, your solutions must be received by Sept. 30, 2019.

Previous Issue’s Puzzle—Six and One 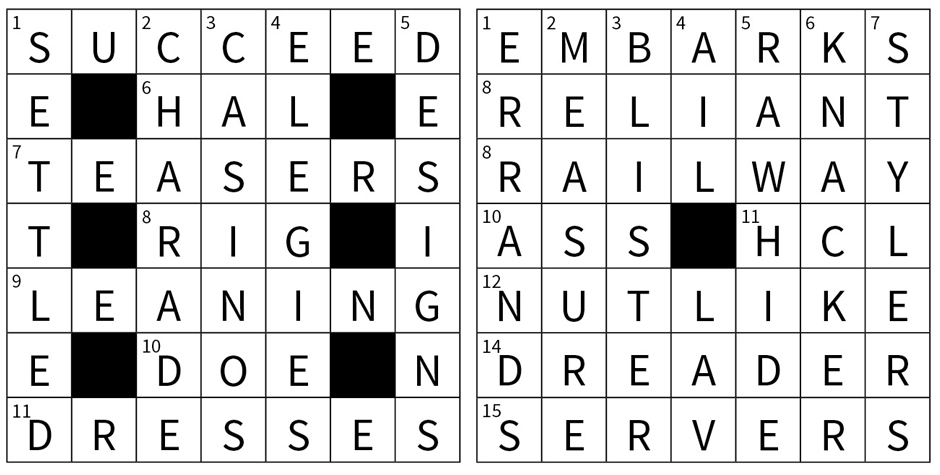 DREADER—Pun on D-READER rather than E-READER (“earlier version of Kindle, perhaps?”)

KNACKER—Last letters of “took in a classic mink one winter”)

TOM TOCE is a senior manager for actuarial services with Ernst & Young in New York and is a member of the Jeopardy Hall of Fame. Solutions may be emailed to him at Thomas.Toce@ey.com. In order to make the solver list, your solutions must be received by Sept. 30, 2019.