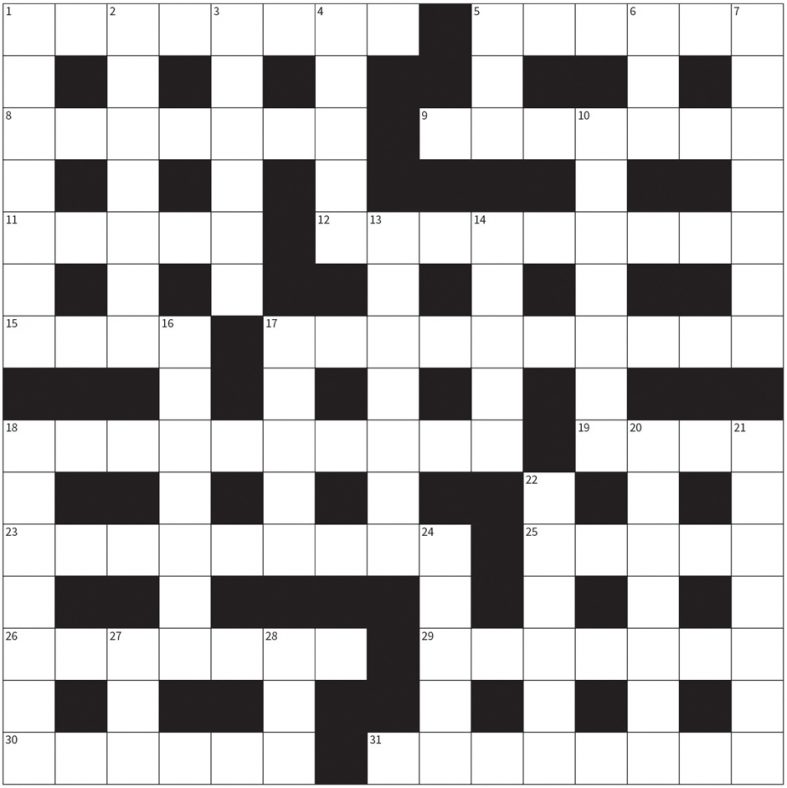 Most Americans are dealing with their taxes about now, so I thought we should have a tax-themed puzzle. There are no complicated instructions for solving this one. You need to spend your time on your filing.

All the clues lead to common words playable in Scrabble, except for five proper nouns, a few two-word answers, a common acronym, and a common foreign word. Ignore punctuation, which is designed to confuse.

1. On the borders of alarming perturbations

5. Privileged expect contempt from both sides

11. One hundred and fifty plan lawsuit

15. Objectively, we dropped out of pondering Dynasty

26. Hurry up and show some life

29. It’s taking a couple of emphatically declared yes votes to get down to brass tacks

30. Arrange pieces of Elgar and Nielsen?—certainly

31. Jack and some others are beginning to wonder what he uses to open the cabinet?

2. Cardinal uncovered nothing at first like rigged voting districts

3. Return and enter the other way

4. It’s a gift to be comparatively well off

5. It’s often said to be near-term

6. Louis’s state is one after Missouri

7. Unit is a hit in African nation

13. Art peed all over the bureaucracy

14. Nothing needs to be mentioned

18. In Barcelona, what comes after a vote—ruin?

24. Nothing but net seen around Arizona and New Mexico?

28. First Lady is on the brink

There was an error in one of the hints—or depending upon your perspective, the colors in the diagram. Somehow, red/white/blue/yellow in the first diagram I reviewed became red/white/yellow/blue in a later draft, and I didn’t catch it. If you didn’t use the hints, you wouldn’t have caught the error. Several solvers who did, did. It’s possible there were more potential solvers who got thrown by the error, which I regret.

Dephlogisticated, which refers to air that’s been purified to oxygen. I thought whatever got trapped in the box might need some oxygen. I found it in a list of sixteen-­letter words. I didn’t consider looking it up or searching on the internet for it as using any hints.

ROACHES—Wrapped outside of “roadhouse wenches”

Top of the box:

Bottom of the box:

TIDE—Homophone of TIED (“all even”)

I omitted a few names last time. Mendy Friedman, Jim Muza, and David and Corinne Promislow should have been among the solvers. My apologies.

Solvers using some hints (or not saying)

TOM TOCE is a senior manager for actuarial services with Ernst & Young in New York and is a member of the Jeopardy Hall of Fame. Solutions may be emailed to him at Thomas.Toce@ey.com. In order to make the solver list, your solutions must be received by April 1, 2018, leaving two weeks to finish your taxes.