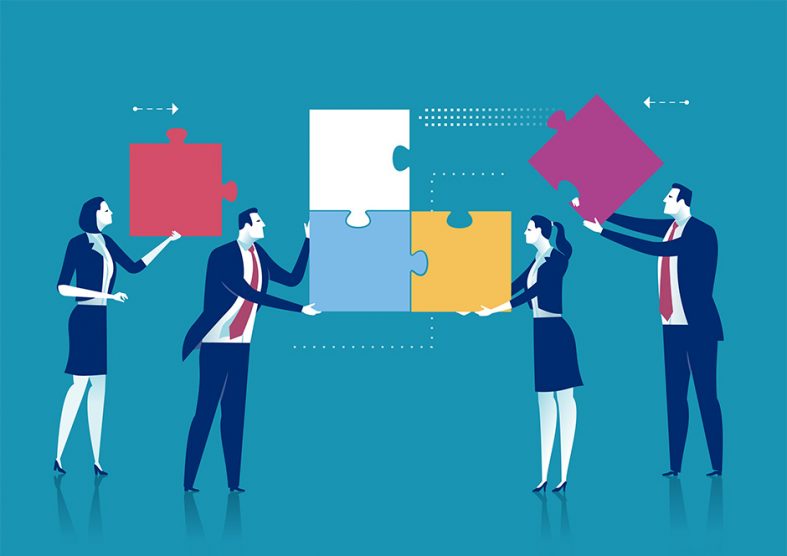 A couple of friends who are really into cryptic puzzles decided to play a game of Scrabble. One was an actuary, the other a dermatologist. In keeping with the spirit of puzzledom, two-letter words were not allowed. I told them that if the final layout had no more than two unchecked letters in a row, I would use it as the basis for this month’s puzzle. I also asked that all one hundred tiles be used. In a regular Scrabble game, the game ends when there are no more tiles to draw and one player’s rack is emptied. In this game, the other player got a last chance. I also asked that each player play in only one direction. The actuary started play and chose Across; the dermatologist worked Down.

The clues are presented in order. In addition to the number of letters in the main word formed, I also show the point total for each play. Premium squares (double and triple letter and word squares) and the 50-point bonus for using all seven tiles in one play apply as in Scrabble. In three cases, two words were formed, through a player extending an existing word. Each point total pertains to the entire play. Only the main word formed by a player is clued. Both blanks were drawn by the dermatologist, who used one in the fourth position of the first play and the other in the last position of the 10th play.

The puzzle is solvable as is. The point count helps determine a word’s location. For example, the first Across play is worth 120 points. If you subtract the 50 bonus points for using seven letters, then cut the total in half for the double premium square that must be used in a first play, you will realize that the point value of the tiles (including one doubled tile) equals 35. The highest-scoring seven-letter word in the Scrabble dictionary is MUZJIKS, a variant spelling of MUZHIKS, which are Russian peasants, and it’s worth 29 points. Come on, I would never use a word like that in a cryptic puzzle!

Actuaries especially will see the implications. There are only two possibilities for the first play: a 27-point word with an X or a J on the double-letter square or a 25-point word with a Q or a Z doubled. There are fourteen such words, but only four of them are common enough for me to use in a puzzle.

Nonetheless, figuring out the layout won’t be easy. Since one person’s challenge is another person’s tedium, I’ve provided two levels of hints. The first hint involves the first Across play. The regular clue, my test solvers tell me, is tricky and requires knowledge not everyone possesses. So I have provided an alternative to the first clue. The second level of hints reveal the starting square for each player’s move. Use them if you must.

This being an actual Scrabble game, there are no proper nouns. Everything is playable in Scrabble.

The final score was quite close, 455 (dermatologist) to 443 (actuary). These were very good players!

Thanks to Bob Fink, Eric Klis, and Jerry Miccolis for test-solving and editorial suggestions.

Solution to Previous Issue’s Puzzle—How Can You Myth?

With the proper letters removed from the diagram, PROCRUSTEAN MEANS can be formed, describing what one had to resort to in order to complete the grid.