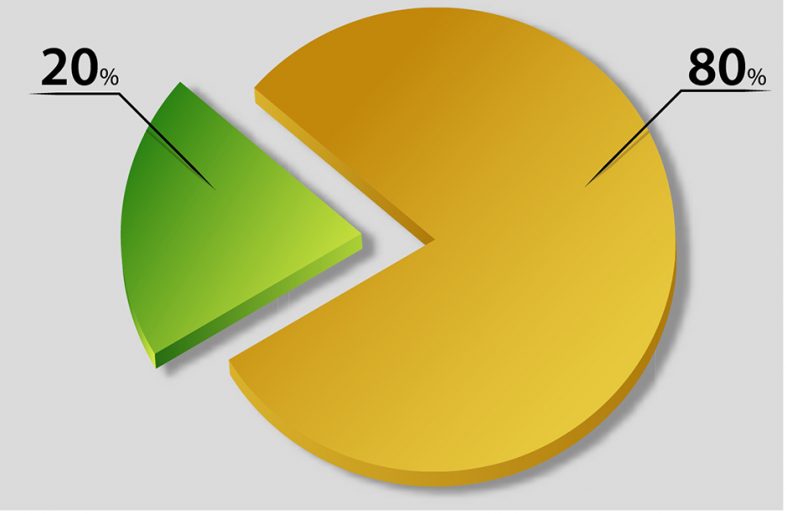 Over the years, one of the most quoted Academy issue briefs on pension topics is a paper, published in 2012, on the “myth” surrounding a defined benefit pension plan funded status of 80%. Local news publications frequently cite this issue brief when that locality’s pension plan is being discussed.

Others often hold up this mythical 80% funding standard as well—financial entities, regulatory bodies, and other pension stakeholders. Oftentimes, 80% is seen and described as a bright line, where plans above that marker are deemed “healthy” or “actuarially sound” and those that are below that line are “unhealthy.”

The reality is not that simple.

Due to the continuing pervasiveness of these citations, the Academy decided to refresh this issue brief; the revised version was released in October.[1] As a matter of course, Academy committees periodically review their published work products to see whether they should be updated or revisited. With this issue brief, there was concern that the frequency of these citations, stated as fact, continued to lend credibility to the myth that an 80% funded “standard” is appropriate.

Media outlets and other stakeholders, some of whom are more knowledgeable than others, seek out experts as they cover these topics in their work. The Academy’s mission is to provide objective actuarial expertise, and it was clear that a reemphasis on debunking this myth was warranted and would be beneficial to all stakeholders, including pension plan participants who may be reading these publications. Millions of workers, whether in the private sector or employed by state and local governments, are covered by defined benefit pension plans and have an interest in the health of their plan. We know that pension plan financial measurements—the calculations themselves and their varied uses—can be difficult to understand for nonexperts.

Therefore, the Academy engaged some of our volunteers with expertise in public, multiemployer, and private-sector pension plans to review and refresh the issue brief. By doing so, we aim to leverage the Academy’s expertise to the ongoing discussion of pension plan health and how to best evaluate it.

The appendix provides a sampling of mentions of the 80% funding “myth” from academic and media sources. It also includes some recent publications from credit rating agencies that include a broader, more nuanced approach to assessing a pension plan than previously seen.

The goal was to clarify how a pension plan’s funded ratio—the ratio of plan assets to plan obligation—relates to the soundness or health of a pension plan or system. Plan obligation or liabilities are a present value measurement of all of the benefit payments owed now and in the future to current participants as well as plan expenses. Actuaries use various methods to measure a pension obligation depending on the purpose of the measurement. The funded ratio is a useful measure, but understanding the health of a plan cannot be reduced to a single measure or benchmark at a single point in time. All else being equal, a better-funded plan can be regarded as “healthier” than a less well-funded one. However, “all else” is never equal, so the issue brief describes the many factors that must be used to place the plan in its unique context and evaluate its financial health. Additional analysis provides a more complete evaluation of a plan’s health than a single funded ratio measure.

It is important to note that the 80% level is codified in certain situations and, as such, could take on outsized importance as a benchmark. For private-sector plans, an 80% funded ratio is measured and mandated by law, the Pension Protection Act of 2006 (PPA), to avoid triggering certain changes such as benefit improvement restrictions and limits on lump sum payments (if offered). Also, under PPA, multiemployer plans use 80% as a level below which stricter funding rules become effective.

A funded status is measured at a particular point in time and could therefore vary significantly from one year to the next based on external events, such as the actual investment returns of the plan’s assets. Therefore, funded ratios should be examined over several years to determine trends and should be viewed in light of the economic situation at the time.

One plan at an 80% funded ratio could be on an upward trajectory to a higher funded ratio while another at 80% could be on a downward trajectory to a lower funded ratio. Actuarial projections of plan obligations such as benefit payments and expenses—together with plan sponsor anticipated contributions, which are determined under a range of economic and investment return scenarios—are needed to accurately assess the health of a plan.

The funded ratio is most meaningful when viewed in the context of other relevant information. A single number at a single point in time does not tell the whole story.

Other factors to be considered in assessing the fiscal soundness or health of a pension plan include:

Plan sponsors experience a variety of circumstances over time—volatile investment returns, changes in actuarial assumptions, insufficient contributions—that could lead to funded levels less than 100% at any point in time. Certain changes such as an adjustment to actuarial assumptions may cause a funded ratio to decrease in the near term but may strengthen the funding of the plan over the long term. Possible consequences of becoming underfunded include the need for larger future contributions, less security for participant benefits, and the potential for future costs needing to be paid by future generations (e.g., employees, shareholders, or taxpayers). All of these risks need to be managed through appropriate benefit, funding, and investment strategies.

A funded ratio of 80% should not be used as the primary or sole criterion for identifying whether a plan is in good financial health—it is inappropriate to do so. There are many other factors to be considered in making this assessment.