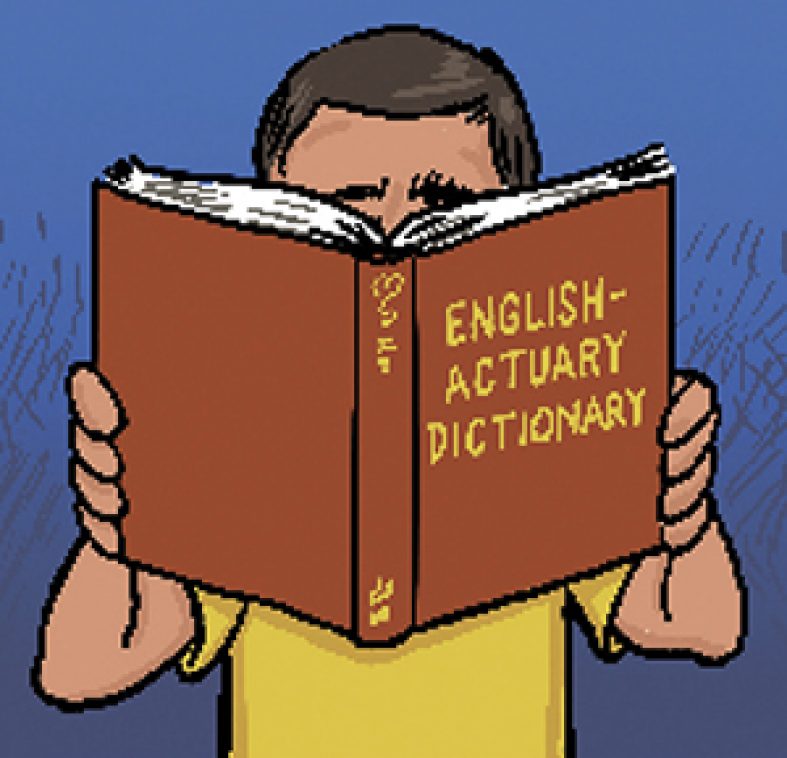 All U.S. credentialed actuaries speak two languages, and many of us speak three or even four. We all speak the language we learned as a small child … and another one we studied for our career. This second language has a universal core vocabulary and several dialects, each of which contains perplexing jargon a layperson would never understand.

Normal cost (Is there an “abnormal cost or an “unusual cost”?), cat modeling (like memes on the internet?), non-admitted assets (you guys—you’re outta here!), claim triangles (right, acute, obtuse, equilateral, isosceles, scalene—how many types of triangles exist?), runoff (like overfertilized lawns in subdivisions?), C-3 risk (what happened to A and B risks, and 1 and 2 risks?) No wonder people avoid actuaries at cocktail parties.

Some American actuaries absorbed a third language, like Spanish, due to its prevalence in the southwest U.S. or southern Florida geographic areas. Many first-generation immigrants picked up English as a second language in their childhood and mastered actuarialese afterward. My hat goes off to these trilingual colleagues.

My first introduction to a new language occurred in high school, where I suffered through Latin for four years. “Amo, amas, amat” is about all I can remember, although in my defense over 50 years have passed since 12th grade.

My next attempt at learning a foreign language was in college. Michigan State required math majors to take a year of either Russian, German, or French—the last of which made for an easy choice but a difficult task. Differential equations and spatial geometry were a breeze compared to French. (Ask me how I earned a “gentleman’s B” at the next actuarial meeting.)

My wife and I planned a trip to France in 2020, so we enrolled in an adult learning French course in 2019. Alas, I remembered as much French from college as I did Latin from secondary school. COVID cancelled our travel plans and our beginner’s French class, for which I was grateful.

I attempted to learn Spanish about 10 years ago, using a popular interactive CD language series. After finishing all five levels and taking several community education Spanish classes, I became somewhat conversant. This three-year campaign in Spanish paid dividends when I walked the Camino de Santiago in 2014. The September/October 2015 issue of Contingencies described my experiences on the pilgrimage. Spaniards understood me, but their responses were usually met with a blank stare por mi.

French and Spanish are two of the so-called Romance languages, having Latin as their root. A similar learning curve evolved for all three attempts: diphthong diction, verb conjugation, sentence construction, etc. These languages differ significantly from English by assigning gender to nouns and requiring adjectives to agree in both gender and number. Lack of practice rendered these previous third languages inoperable.

My wife and I enjoyed an extended vacation in Crete this summer. I spent several months beforehand memorizing the Greek alphabet, its pronunciation, and basic words and phrases. Trust me, phonetically pronouncing a word written in Greek letters is a challenge, let alone remembering its meaning. Male (gyro) and female (potato) nouns continued to befuddle me, and Greek adds a neuter (water) gender.

My reward was a few short conversations with patient Cretans, but well worth the time and effort. How can I maintain my limited Greek in Asheville, so my newest adopted language doesn’t go the way of Latin, French, and Spanish? Ya sas!

Almost every language instructor makes the same recommendation for learning a new language—immersion. My son, Michael, joined the Peace Corps as a volunteer in Morocco in 2000 and 2001. We visited him halfway through his term and we marveled at how easily he conversed in Berber with cab drivers, shopkeepers, and street vendors.

Mike didn’t comprehend a single Arabic word a year earlier, and now I didn’t recognize the person speaking this guttural language so fluently. He grasped the basics in six weeks by living with a host who spoke no English. Mike and his sponsor had to sink or swim. He related many humorous trips to the market where he pointed at fruits, vegetables, and meats and confused their names with those of animals, vehicles, and weather.

How many readers acquired a third language later in life, and how did you attain and retain your conversational ability?