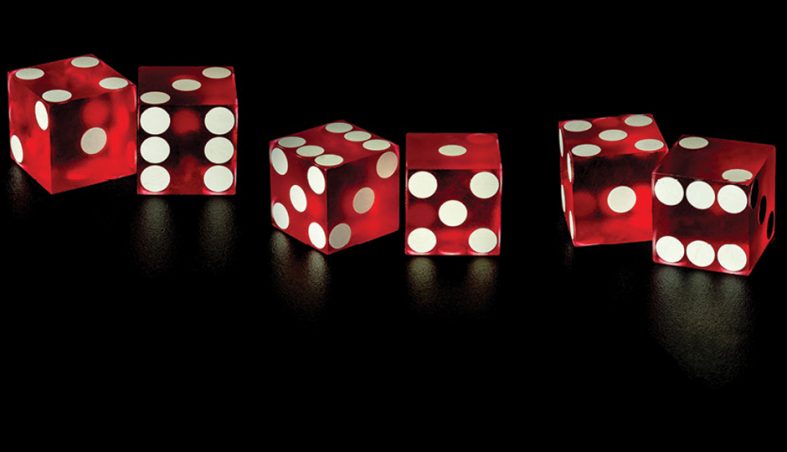 Growing up, I heard the phrase “to roll a seven” as a euphemism for death. Someone “rolling a seven” meant the same thing as “buying the farm,” “kicking the bucket,” etc. I can’t find any such usage in my exhaustive search of the internet, so maybe the expression was only used this way locally. Or maybe just by my older brother, who actually is the only person I’ve heard use it that way. “Rolling a seven” makes some sense as a euphemism for death, because in craps, rolling a seven can be either a very good thing or a very bad thing, depending upon—oh, I don’t know, depending upon something, I suppose. I don’t give much of a hoot about craps.

But I like dice, and I thought it would be fun to make diagrams that look like dice. Thinking about writing clues for all six faces was too much for me to bear, so I’m presenting only one kind of seven here, the three-four combination. You may see the two-five and/or the one-six in future puzzles, I don’t know. The percentage of black squares, or blocks, in a regular crossword is usually around 15%, and the way I’ve designed things, a two-pip die would come in at 4% and a one-pip die at 2%. Can anyone make a reasonable 7 × 7 word square with only one block in the center? Stay tuned. If I don’t roll a seven before the next two issues, I’ll give it a try.

The clues are arranged by rows and columns, but the diagram for each clue is left for the solver to determine. The hints provide the correspondence. There is one unusual word and two proper nouns. One of the proper nouns refers to a college sports star from a few decades ago. Everything except the proper nouns is playable in Scrabble. Ignore punctuation, because I do. 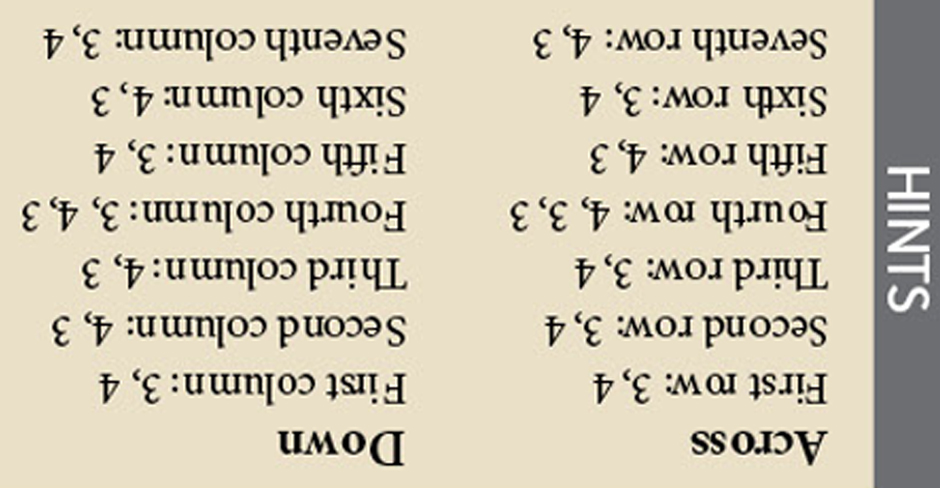 TOM TOCE is a senior manager for actuarial services with Ernst & Young in New York and is a member of the Jeopardy Hall of Fame. Solutions may be emailed to him at Thomas.Toce@ey.com. In order to make the solver list, your solutions must be received by March 31, 2019.

4. FRACAS—Anagram of “A scarf.” (A fracas and a donnybrook are both words for brawls.) Also a merger of the RAF (“Military organization”) and the CAS.

5. ACCESS—Outside “actor’s process.” Also a merger of the SEC (“Regulatory body”) and the CAS.

6. CANONS—Homophone of CANNONS (“big guns”). (In music, a canon is an imitation.) Also a merger of CNN with the SOA.

7. SEAFOAM—Anagram of “same oaf.” Also a merger of FEMA (“Part of a cabinet department”) and the SOA.

8. SALONS—Outside SALOONS (“Speakeasies“). Also a merger of SNL (“Radio/TV”) and the SOA.

It’s difficult to solve cryptic clues with no crossings. Sometimes people send me individual clues, and I can’t always solve them. A tightly-constructed diagram allows the puzzler to do all kinds of tricks. For example, triple- or even quadruple-definition can be fun to throw into a puzzle now and then, but as one-off clues, they’re just frustrating. Many solvers solved all ten clues with no hints. A greater percentage than usual used the hints (which added context if not crossings). And a number of good solvers missed an answer or two (or more). So no ranking this time. I’m just listing everyone who submitted an answer.