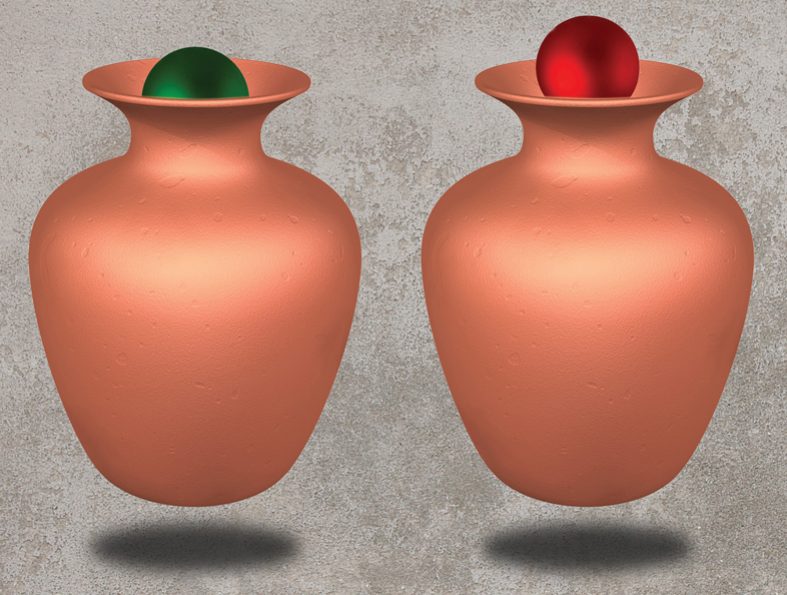 Combinatorial problems are often posed using urns into which balls are placed and then withdrawn. Urns are somewhat mysterious; they can be envisioned as a dark vase with a large round bottom coming to a small opening at the top—just large enough to put in or take out a ball. When a ball is taken out of an urn, we say it is drawn.

Typically, one cannot see into an urn and the balls are identical except for their color, making the draws random. Urns and balls are used to introduce and model problems in combinatorics and elementary probability as in Problem 1. Urns and balls have the magical power to transform themselves into other things. For example, in Problem 2, the urn becomes a pond and balls become fish. In Problem 3, the urn becomes a bag.

Problem 2. (Steinhaus) An ichthyologist wanted to estimate the number of fish in a pond that were suitable for catching. She threw a net with regulation-size mesh into the pond; after taking the net out, she found 30 fish in the net. Making sure to keep them alive, she marked each of them with a suitable color and threw them all back into the pond. The next day she threw the same net into the pond and caught 40 fish, of which 2 had been marked. Approximately how many fish were in the pond? Justify.

Solutions may be emailed to cont.puzzles@gmail.com. In order to make the solver list, your solutions must be received by February 1, 2023.

Solution to Previous Puzzles—Poker Is Back!

The worst hand that is possibly the nuts is three queens on a board of Q, 8, 7, 3, 2 where no flush is possible.