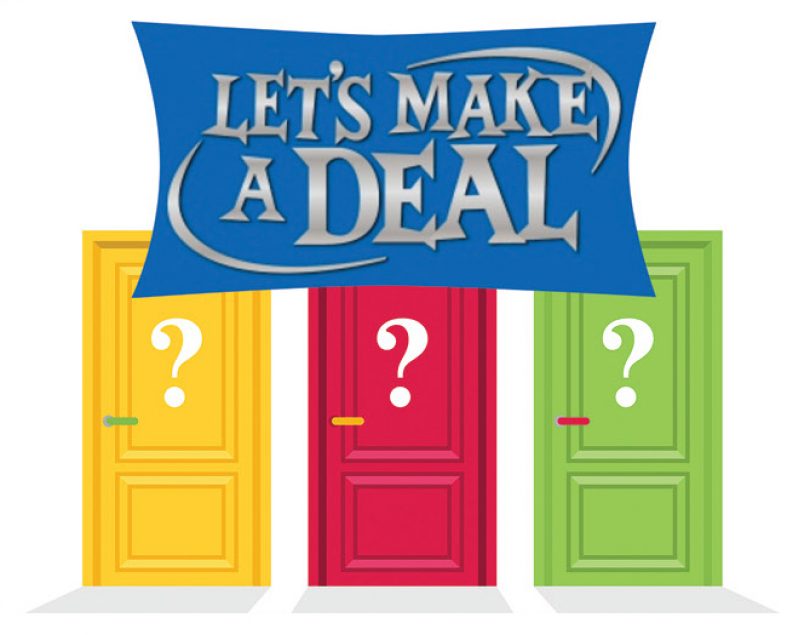 Re the explanation of the Monty Hall problem, pshaw!

There were never three doors in play and without that basis the analysis shown falls apart. If there had been three real doors, roughly one time in three when Monty had a door opened, the prize would have been there. But that was never the case. NEVER!! Monty definitely knew which door hid the prize and which two didn’t. In removing a “didn’t” he reduced the game to just two real doors. Thus a 50-50 chance for either real door. The probability of winning by switching doors is 1/2, just as it is for keeping the original door. Regardless of what Marilyn vos Savant might say on the subject.

If you’re doubtful, imagine if there were 20 doors and after one was chosen, Monty had 18 of the remaining 19 opened and miraculously, night after night, no prize appeared. The contestant is then offered the choice of keeping the original door or switching. The analysis presented would say that switching would yield a 19/20 probability of winning. To end at the beginning, pshaw. It would be a 50-50 proposition, just as it is for three doors.

In the Letters section of the July/August edition of Contingencies, I observed the placement, certainly coincidental, of Mr. Howard’s letter on the “FHAT Tax” along side Mr. Klieber’s letter on “Yet Another Fallacy.” While Mr. Howard’s “FHAT Tax” is undoubtedly meant to be tongue-in-cheek, it does illustrate an economic fallacy described by 19th century French economist Frédéric Bastiat as “what is seen and what is not seen.”

An imposition of a tax on the “FHAT cats” to pay for infrastructure would surely create jobs in the construction industry. That is the part which is seen. What is not seen are the jobs lost in other industries, as the new tax forces the “FHAT cats” to spend and invest less elsewhere, in precisely the same amount as the tax.

Henry Hazlitt, a journalist who wrote primarily about economics and business, describes the fallacy in detail in his 1946 book, Economics in One Lesson. I will be pleased to provide a free copy to the first 10 actuaries to request it.

I thoroughly enjoyed the feature article “The World’s Most Challenging Math Problems.” This is a great summary of these problems.

One comment. At the conclusion of the discussion of the Riemann Hypothesis, the authors state that Sir Michael Atiyah may have solved the problem and won the $1 million prize. Unfortunately, Atiyah died in January 2019, a few months after making his surprise announcement of a proof. Too late for the prize money.

In addition, the article states that, “many leaders in the field have accepted that Atiyah has in fact done it.” Most articles I’ve read from the mathematical community state the opposite. Most leaders in the field are skeptical, especially since Atiyah offered no new insights but rather combined two 70-year-old insights in an “new way” for his proof. Moreover, his public comments are only a sketch of the idea. Given the intense amount of research on this topic in the last 150 years, it seems highly unlikely that no one else would have stumbled on his proof in the last 70 years if it were indeed correct.

This problem may seem abstract and useless, but it is in fact closely linked to data encryption which I’m sure impacts every actuary’s work.