A Valuable Piece of the Puzzle

The Harvard Business Review published an article in 2017 titled “Neurodiversity as a Competitive Advantage.” The article began with an anecdote about a man named John who had two master’s degrees—both with honors. Not only was he terrific at math, but he had software development skill as well. He seemed like a prime candidate for the tech industry. Yet, he had considerable difficulty finding a job. He was unemployed two years before being hired.

His problem was readily evident by looking at him. He wore headphones all the time. He could not make eye contact. He kept tightening his shoelaces every 10 minutes. Finally, though, when a company did hire him, he was a stellar performer—whenever he kept his shoelaces tight.

In its strictest interpretation, every person is neurodiverse. No two people are alike. While it is impossible to quantify behavior, perhaps we could picture a normal curve. The people whose behavior most conforms to social norms would be crowded around the center. Neurodiverse people would be in the tails of the distribution.

Another factor to consider is deliberateness. A person who does things deliberately would be closer to “normal” than a person who does not. People who do not behave deliberately are the real outliers. They are the ones who need special consideration: Among their maladies are ADHD, autism, dyslexia, Tourette’s syndrome, and depression disorders.

Neurodiverse people often possess special talents. Indeed, many of the most successful composers, authors, and artists struggled with such issues—examples include Sergei Rachmaninov (depression), John Irving (dyslexia), and Andy Warhol (believed by some to have had autism). Neurodiverse people are often intelligent and creative. They often excel at math, pattern recognition, and memory. But their issues make it difficult to convince interviewers that they would fit the sought-after profiles.

Major businesses are now seeking out neurodiverse people to fill their staffing needs, according to the HBR article. While these programs have not been in place very long, in many cases they appear to be paying off well. Not only do these companies enhance their reputations, but they are experiencing productivity gains, better quality, more innovations, and even greater employee engagement. Perhaps the most interesting benefit is that while accommodating the neurodiverse employees, businesses have learned the benefits of being attentive to the needs of all employees, optimizing results even further. 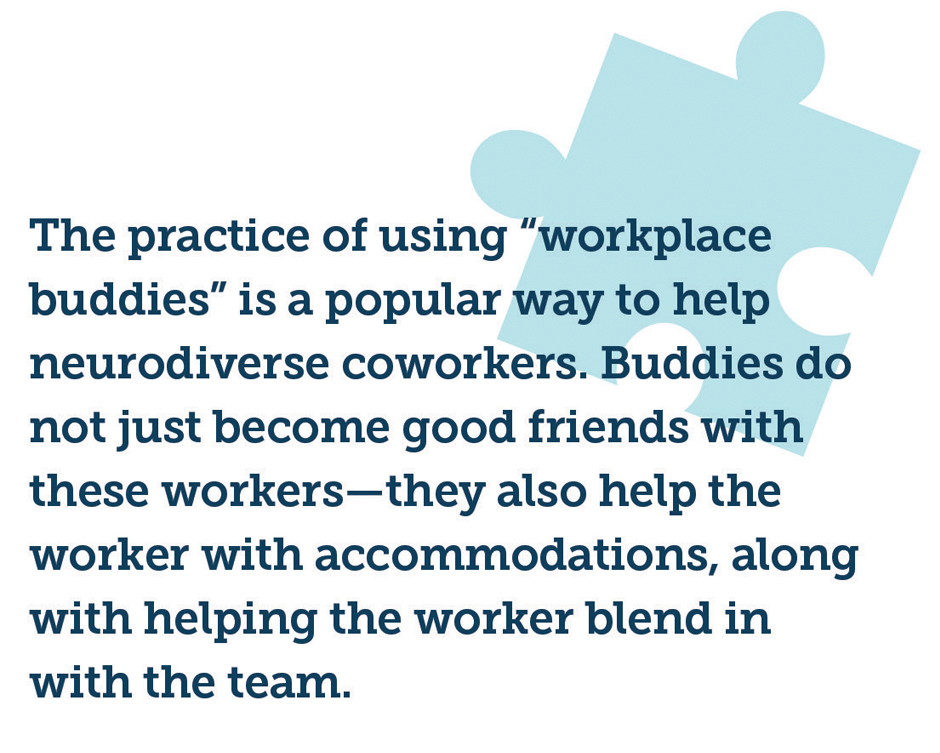 Should issues arise, the buddy can help work out solutions.

Neurodiversity is not all that uncommon. The HBR piece notes that some estimates put the population of the United States that is neurodiverse at a little less than 1%. Actuaries are often stereotyped as being more neurodiverse than typical. As talented as we are, perhaps there is a large amount of talent even among fully employed actuaries that is not being fully utilized.

Two years ago, I met an aspiring young actuary. He was not able to find substantive actuarial work because of his autism. He could not sit still. I found it was hard to look at him because he was constantly moving around. But I empathized with him. There was nothing he could do to stop it. Yet I also knew that he could make valuable contributions to any employer that would give him the chance. In fact, he would probably work extra hard, determined to prove himself.

The biggest reason I empathized with this man is because I myself am neurodiverse. Throughout my life, I have battled with depression, stress, and Tourette’s syndrome. Like other outliers, I showed intelligence early in my life. I could do simple addition before I started school. Before I was 10 years old, my creativity revealed itself through my vivid imagination. Participation on the journalism staff in high school honed my writing skills, making it my best creativity tool. Writing ability has been among my best assets in my career.

Despite the progress I have made over the decades, I have never been able to completely defeat my issues. Science has developed medications to help combat these issues. Advances in psychology have produced therapeutic support. But no cures for any of my disorders have been discovered. At least I have learned many effective ways to combat the disorders.

Listening to relaxing music helps when I am in an office. Whenever I am in a library, I tend to have fewer and quieter tics; this probably has something to do with the obvious presence of other people in a particularly quiet environment. When I was younger, I often went bicycling. This hobby not only helped reduce stress, but it helped me keep in shape. (Too bad I am not in the same good shape at this age to bicycle as much!)

Of my three disorders, Tourette’s has always been the least consequential. Major depressions can completely debilitate me. At least those do not happen often—only two of them in the last 40 years. If a depression looks like it will become too dangerous, I know what to do—get help. Stress can create its difficulties, sometimes undermining my performance. Again, I know several ways to bring the stress down, and know to get help whenever needed.

While I make efforts to control Tourette’s, it is the hardest to suppress. Only once have I ever made significant progress against Tourette’s. When the next period of major stress occurred, the Tourette’s skyrocketed. Efforts to use the same technique have had no effect. Of the three disorders, Tourette’s is the only one that I do not have substantive defense against, except that I know Tourette’s is correlated with stress.

One problem with Tourette’s is that it is auditory, not visual. On top of that, it is hard to know whether the tics are bothering people unless they tell me about it. The tics never affect my performance. They are harmless. Most of the time, tics involve something that I was not even thinking about. For example, if I inexplicably mumble “Oklahoma,” chances are slim that I was thinking about the Sooner State.

Whenever dealing with neurodiverse people, please remember not to hold their disabilities against them. They can still be valuable workers. Whether their disability signals are audible or visible, they are good people who can do good work. You can count on them to make exceptional contributions to the team.

If the quirks of neurodiversity become an issue in the workplace, do everything in your power to work with the individual to work something out that all parties can agree to. Remember that these are good people—and valuable assets to companies shrewd enough to hold on to them.