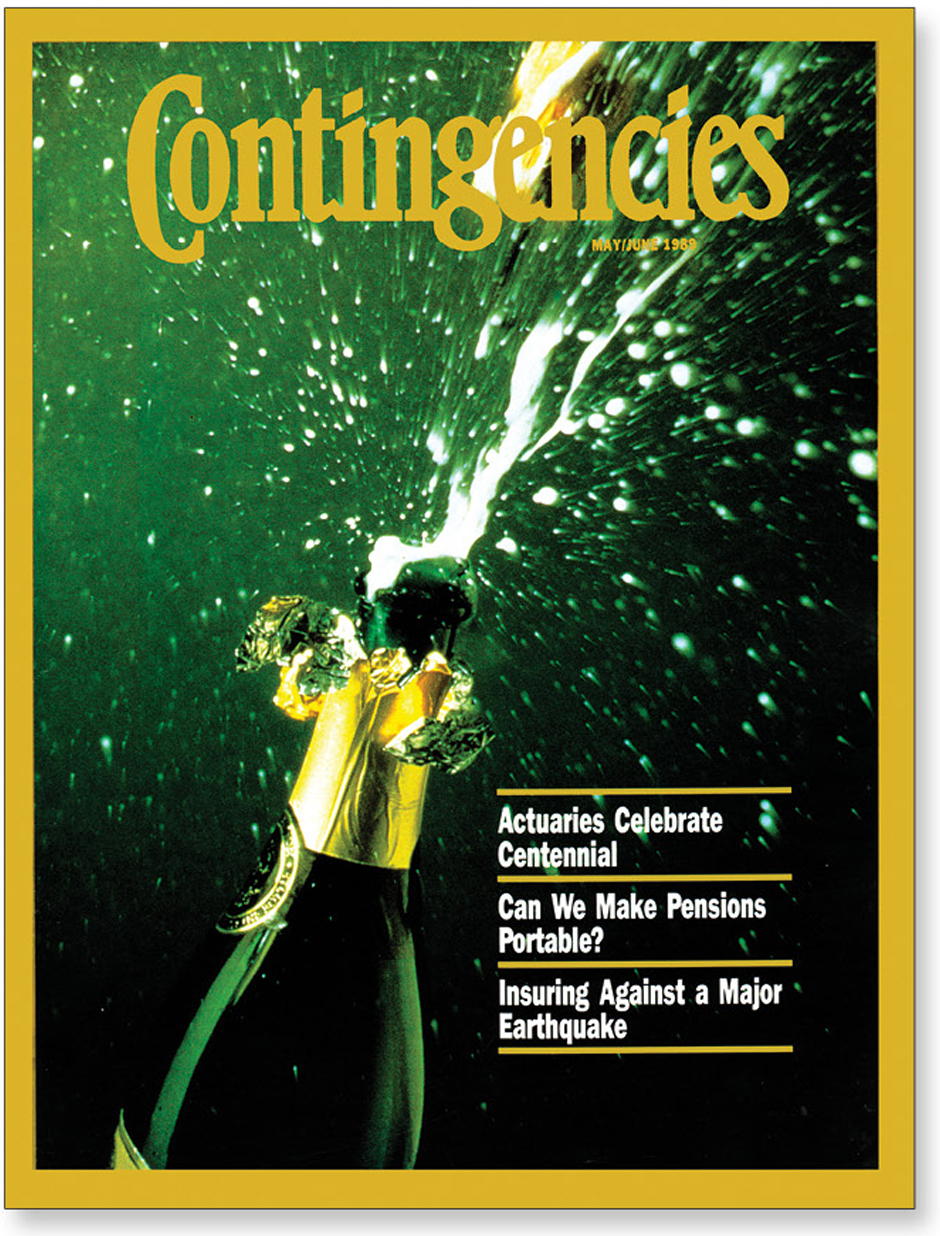 A Google search of the year 1989 reveals (the first) George Bush was sworn in as president of the United States in January, China’s Tiananmen Square protests happened in April, Hurricane Hugo slammed into the United States in September, and the Berlin Wall fell in November. Concurrent with these auspicious historical events, that same year the Academy launched its bimonthly magazine, Contingencies.

On this occasion of Contingencies 30th anniversary, beyond offering congratulations to the Academy’s flagship publication, it’s a good time to reflect on one of our profession’s strongest voices. Contingencies is the largest actuarial-themed magazine by circulation, with more than 34,000 subscribers, and reaches more than 13,000 legislators, regulators, insurance commissioners, and actuarial students with each issue. The magazine has been an important bridge between the actuarial profession and the public at large, offering both nitty-gritty how-to (or how not-to-do) stories that help actuaries in their daily professional practice, along with more general stories accessible to general readers.

Contingencies covers topical and cutting-edge issues from many angles—obtuse to acute—offering insight and analysis into such contemporary topics as health care and telehealth; robotics, cybersecurity, and artificial intelligence; and the new on-demand and gig economies—simultaneously diving deep into the weeds and passing the “doctor’s office test” of allowing a lay reader to pick it up and enjoy just about any feature story as an interesting and accessible reading experience.

Writers from diverse backgrounds and fields contribute to Contingencies—in addition to actuaries, who, like Lori Weyuker last year, offered a first-person account of her experience in the growing pet insurance field.[1] The most recent March/April cover story dissecting “Fake News” from multiple angles is an example of a timely helper for readers—read, voters—to discern wheat from chaff heading into the 2020 election cycle.

For the actuary, there’s plenty of sustenance, with each issue’s “Up to Code” column on actuarial professionalism offering brush-up perspectives and trends observed by the Actuarial board for Counseling and Discipline (ABCD), and real or hypothetical “gray area” situations that actuaries routinely face in our work. In his recent Presidential Papers series “Professionalism in Action,” Academy Penultimate Past President Bob Beuerlein covered everything from the importance of implementing professional and ethical standards in the actuarial profession to new and emerging practice areas, actuarial standards of practice (ASOPs) regarding actuary-to-actuary communications, and the modeling ASOP that has been under consideration, and revision, for several years.

We like to think the regular editor’s Inside Track, the President’s Message, and the End Paper at the back of each issue give a fresh perspective on what’s, respectively, inside the issue and general theme(s); something important, topical, and relevant for the Academy and the profession to be aware of; and an interesting perspective on a discrete issue that you generally won’t see elsewhere. Of course, if you like numbers—and who reading this doesn’t?—Contingencies is brain-candy. From metrics and analytics to charts and graphics, and of course, insurance, business, and the economy, the magazine will keep your math brain-wheels turning, including in a fun way with the “back of the book” games and puzzles.

All these reasons and more are why Contingencies—which has won awards for both its writing and design[2]—has been a net positive for the Academy, and will continue to be for another 30 years, and beyond.

[2] Including the cover story, “Smoke & Mirrors: Marijuana Use and Life Underwriting,” from the March/April 2015 issue, which won a bronze Excel Award from Association Media & Publishing for best magazine feature article, and the September/October 2016 cover story, “In the Red Zone—Sports and Concussions,” which won a gold Excel Award in the design category.

Contingencies Keeps Professionalism in the Spotlight

In addition to informative, entertaining general-interest feature articles that appear in each issue, Contingencies has long highlighted actuarial professionalism within its pages. Because the audience for the magazine is wider than just actuaries—legislators, regulators, business professionals, and educators also read Contingencies—it’s vital that we keep this important focus on professionalism front and center.

From its earliest days, Contingencies has contained stories about how the profession maintains its self-governing nature. Launched just after the permanent formation of the Actuarial Standards Board, the magazine in its early days ran stories like “Concocting an Actuarial Standard—for a Product That’s Anything but Standard” (March/April 1991) about drafting an actuarial standard of practice for long-term care insurance. This sort of “how the work gets done” look helped reassure all audiences that the actuarial profession was capable of the self-regulation it has undertaken through the Academy.

Contingencies continued to tell the story of professionalism. Launched in the January/February 2006 issue, the popular “Up to Code” column provides a glimpse into the workings of the Actuarial Board for Counseling and Discipline (ABCD). The ABCD has taken pains to engage with readers through this column, continuing to encourage actuaries to request confidential guidance before an issue rises to a level that might result in an inquiry.

As the magazine celebrates 30 years, let’s take a moment and acknowledge the role that professionalism has had—and continues to have—in Contingencies’ pages. It’s an enduring legacy that will continue to be written for years to come.

Did You Know the Contingencies Website Was Recently Relaunched?

It’s your one-stop shop for everything in the magazine—from the latest articles to past issues to an updated Actuarial Job Bank. And it’s now mobile-friendly so you can read your favorite articles on the go.

What else is new?

Contingencies has been delivering quality content and informing conversations since it was first published three decades ago. With this new site, our goal was to make it easier for you to read, find, and share the Contingencies features and columns you enjoy in every issue. We’re proud of our new website and invite you to come visit it today.

BonoTom Studio has been the designer of Contingencies for almost 30 years, but 30 years ago, there was no BonoTom Studio. There was, however, Bono Mitchell Graphics, a one-woman design studio at 15th & K Streets, in northwest Washington, D.C. It was there that the original look and feel of Contingencies was conceived. I joined Bono in the fall of 1989 and have worked on every issue of Contingencies but the first two. We incorporated and worked together until Bono retired in 2016. I sat down with Bono (sans tequila shots as in the old days) to share her remembrance about the startup.

Tom: Good morning, are you ready to talk Contingencies stories?

You, as Bono Mitchell Graphics, were the original designer of Contingencies in 1989.

Yeah. I had an office on K Street, and actually Ken* used to freelance for me from time to time, so he was there at the beginning as well. I don’t remember exactly how it came about, but I met with the original publisher, Erich Parker, and the original editor, Dana Murphy, and from the get-go there was a trust and understanding that we wanted to make this a lasting project.

*Ken Ceccucci is currently the head designer at BonoTom Studio, and has been responsible for much of the magic that has happened in the pages of Contingencies over the past three decades.

You were on K Street then, but you must have been building the studio in your house, because I joined forces with you in August of 1989 and worked with you on the September/October 1989 issue. And we worked out of your house.

That’s right, and remember, until you got there with your little Mac, all the work was done the traditional way, with typeset galleys, wax, X-Acto knives, burnishers, and pasteup. 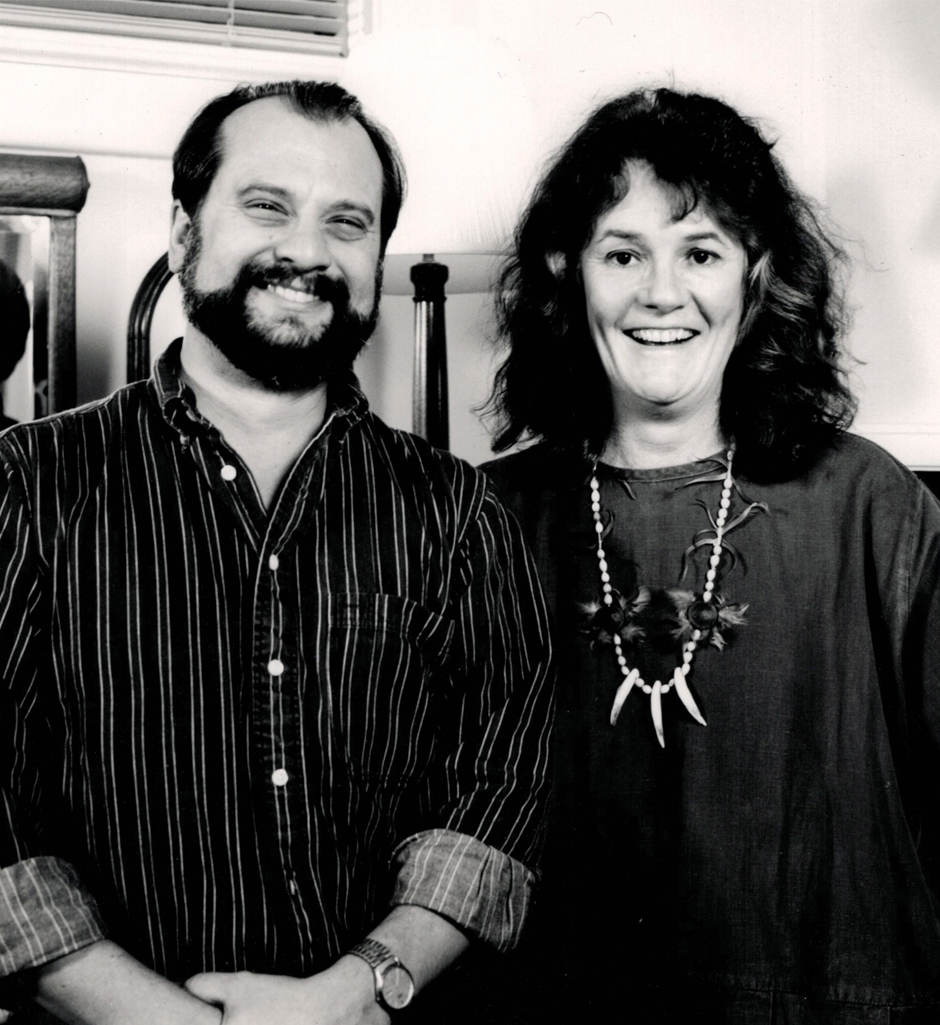 Tom Specht and Bono Mitchell circa 1989

And your room-sized stat camera.

Right, and I always made you change the chemicals.

Oh, I haven’t forgotten. We were still transitioning, because at the time, I had the computer, but I also had a typesetting machine in your basement. We sort of did it both ways, until we eventually produced everything only on the Mac.

I remember. I didn’t know a thing about computers at the time and would sit behind you and say “Move this higher.” “Make that text bigger.” “Change that rule to red.”

Ha! You’ve mentioned that over the years. We didn’t have a scanner; we were still sending photos to China to get color separations, so even when we used the computer, it wasn’t yet anything like it is today. You couldn’t place ads. You didn’t see photos on the screen, just a black box placeholder, and the printer would physically strip in the photographs on the four negatives it took to produce a 4-color page.

The coolest thing—and the thing people don’t even think about today—was being able to wrap type around photos or other objects. That was a major feat with traditional methods.

Yeah, the good old days in graphics weren’t really all that good. Everything is much easier now, but what never changed was the thought process. Good design is good design. The only difference is how you get to the finished product.

Erich Parker was the founder of the magazine, and he really gave me free rein with the design and allowed me to do pretty much whatever I wanted to do. Plus, he frequently had really good ideas of his own.

In fact, all of the people we’ve worked with at the Academy over the years have been quite similar—they’ve allowed us to create, and they frequently have really good ideas, so it’s been a pretty exciting collaboration.

And with the exception of a few issues here and there over the years when there was a temporary fill-in editor, we’ve only really dealt with four “regimes,” if you will.

Right, who were they? (laughs). After Erich, there was Steve Sullivan, then Linda Mallon, and the current Eric [Harding]. All really smart, creative people. The Academy hires well.

The main thing that I think about Contingencies is the fact that the subject matter is all over the place. It was my favorite magazine, because you never knew what the subject was going to be. Unlike other professions, like bankers, or contractors, or whatever, actuaries really deal with all aspects of life.

We’ve had stories about football, about hurricanes, about gambling, one about an actuarial poet, an issue about Charles Dickens, one about Charles Ives. They’ve covered political issues, health care, redlining, and I can’t even remember what all else.

They had a story on holocaust survivors, one with a custom photoshoot including three infants, a story about a Buffalo soldier, not to mention the normal things you would think actuaries would cover like health insurance, Social Security, property loss, etc.

Yeah, the stories are much less about a particular industry and more about, well, just people and all aspects of peoples’ lives. Usually it was interesting to read the damn articles.

But there were some wonky ones we never understood.

True—stories that had so many charts and graphs and equations, that we had no idea what they were about. Heck, you’d have to be an actuary to understand it, but somehow we illustrated it!

That’s another great part of having worked on Contingencies was that there was a budget to hire some really good, internationally recognized illustrators like Richard Thompson, Guy Billout, Michael Glenwood, John Cuneo, John Pack, and so many others that I can’t name them all.

Because it was a bimonthly, there was always time to consider design options. Should we use photos for this story, or does it need an illustrator, or can we illustrate it ourselves? I mean, it was just always fun.

print
Tags May/June 2019
Next article Where Are the Women?
Previous article Taking the Long View