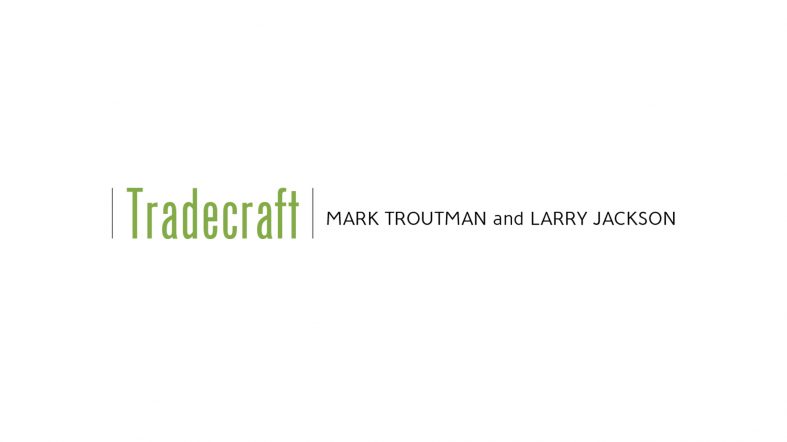 By Mark Troutman and Larry Jackson

Perhaps Musician Huey Lewis and his band The News were among the first to ask for a specialty drug to fit their specific situation in their song of the same name:

One that won’t make me sick;

One that won’t make me crash my car Or make me feel three feet thick.

I want a new drug,

One that won’t hurt my head;

One that won’t make my mouth too dry Or make my eyes too red.

One that won’t make me nervous Wondering what to do;

One that makes me feel like I feel when

The major impact trend on catastrophic medical claims is specialty pharmacy developments in biosimilars, orphan drugs, and breakthrough therapies. This increasing pipeline of new specialty drugs and targeted therapies results from several market trends. Pharmaceutical manufacturers continue their direct-to-consumer advertising to increase consumer awareness. Increased utilization naturally occurs due to the aging population and trend toward outpatient health care, as well as new and more aggressive drug treatment plans. This situation creates a push-pull conflict between supplier and payer as suppliers push for solutions at highest cost to increase margin and payers push for solutions and lowest cost to increase bottom line.

Let’s take a look at various drivers of catastrophic claims and see what has happened in the past 12 months before diving deeper into prescription drug costs.

The following conclusions are drawn regarding the biosimilar market:

CAR-T is an acronym for “chimeric antigen receptor T-cells.” T-cells are an important component of the human immune system. In this treatment, these cells are removed from patients, genetically modified, and reinfused back into the patient. The genetic modifications allow the T-cells to recognize and attach to specific proteins on tumor cells and kill them without harming healthy cells nearby. This is a one-time infusion rather than an ongoing treatment plan.

Kymriah™ (tisagenlecleucel) is a poster child for the CAR-T drug category and was approved in 2017 for a specific pediatric leukemia. It has subsequently been granted a second approval indicator for another form of lymphoma. With a price approaching $500,000 for one treatment, the potential impact on medical costs is staggering. Another drug, Yescarta™ (axicabtagene ciloleucel), was approved by the FDA in 2017 for a specific form of non-Hodgkin’s lymphoma and is currently used only when a patient has failed at least two other forms of treatment.

Orphan drugs and rare diseases—The Genetic and Rare Diseases (GARD) Information Center at the National Institutes of Health defines a rare disease as one that affects fewer than 200,000 people in the United States.[5] An orphan drug is then a drug or biologic intended for the safe and effective treatment of rare diseases or disorders, or of those that affect more than 200,000 persons but are not expected to recover their respective development and marketing costs. Orphan drug status is granted by the FDA Office of Orphan Product Development.

The challenges for payers of orphan drug costs are many. The first challenge is the imprecise definition of the targeted population. Secondly, despite the high cost impacts, reliable utilization management options are limited. As with demand-driven marketing strategies on radio and TV for consumer awareness of new drug options, patient advocacy groups related to these rare but complex conditions increase demand for the product. It is difficult to find actionable, clinical information about such diseases, and no existing approved treatment plan or clinical guidelines often exist for orphan drugs or rare diseases. These orphan drugs may be also simultaneously designated as breakthrough therapies. Even if clinical data does exist, it may only address one component of the rare disease or subpopulation and may not be relevant to the specific situation under consideration.[6]

Examples of orphan drugs treating conditions that were previously untreatable are shown in Figure 1.

The bottom line on breakthrough therapies is that the bottom line is not yet proven. Although these types of drugs were given faster times for approval, there is no over-whelming evidence that these drugs provide improvements in safety or efficacy when compared with their non-breakthrough counterparts given that most orphan/break-through drugs cost more than $100,000 per year. Time to market is delayed by legal defense as asserted by the manufacturers of the traditional products that also treat the ailment targeted by the breakthrough therapy. 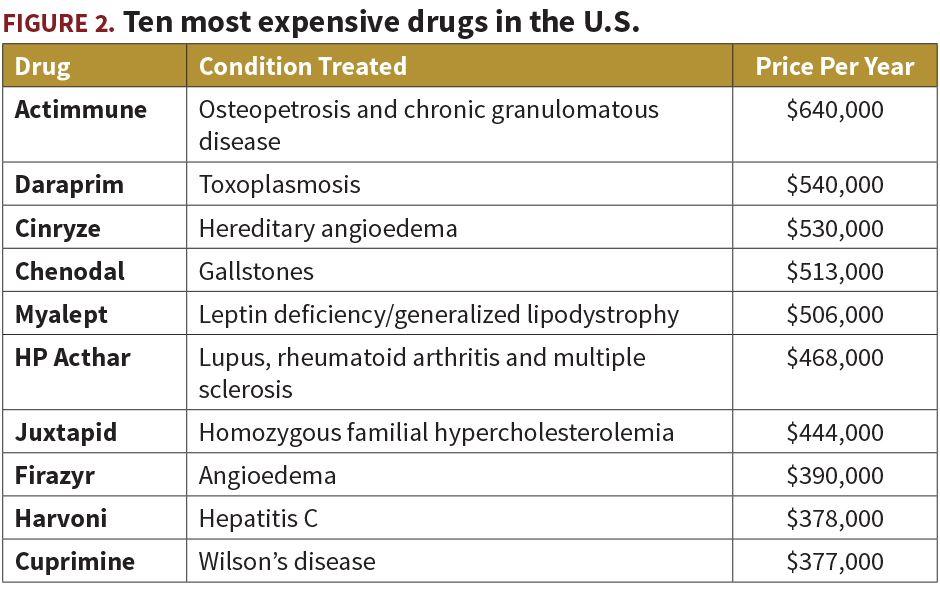 As for traditional prescription drugs, the ten most expensive drugs in the United States are outlined in Figure 2. This “Top 10” list was previously dominated by drugs for treatment of hepatitis C, but costs have mitigated for many of those drugs (e.g., Sovaldi, Harvoni, Daklinza, Olysio and Viekira Pak). For example, Sovaldi is now under $30,000 per month.[8]

One of the side effects of the opioid epidemic has been the increase in the supply of donor organs associated with deaths in this population. According to an Optum analysis of data from the Organ Procurement and Transplantation Network (OPTN), drug intoxication is a primary driver of the in-crease in deceased donation. Up until 2009, only 4 percent of deceased organ donors per year were classified by OPTN with the death mechanism “drug intoxication.” From 2009 to 2014, that percentage climbed to 7.3 percent of organ donors. In 2015, it rose to 9.3 percent. Since 2016, the annual rate has hovered around 13 percent. This increase is high relative to increases in other donor death mechanisms. From 2010 to 2017, drug intoxication deaths drove 42 percent of the total increase in deceased donors, with cardiovascular death (35 percent) and asphyxiation (13 percent) rounding out the top three drivers.[10] 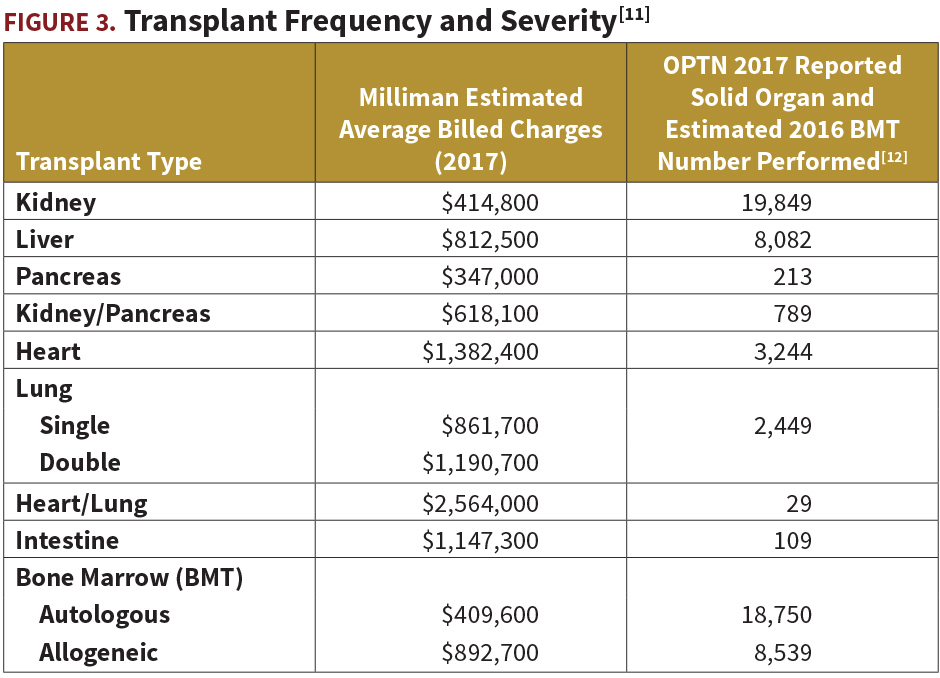 There has also been an increase in bone marrow transplant (BMT) frequency. Commentary from the 2017 summary report from the Center for International Blood & Marrow Transplant Research (CIBMTR) states, “The estimated annual number of allogeneic transplants recipients surpasses 8,000 a year in the US in 2013 with 8,539 transplants estimated in 2016, up from 8,474 in 2015. The number of autologous transplants recipients in the US continues to increase at a much faster rate, most prominently since 2010, mainly from transplants performed for plasma cell and lymphoproliferative disorders extending to older patients.” The report further notes that reporting of autologous BMTs is voluntary and estimates the CIBMTR database captures data from about 80 percent of those transplants.

Cost drivers of deteriorating loss ratios of many insurers and reinsurers in the health care catastrophic medical excess of loss market segment include the Affordable Care Act adjustments to coverage—removal of annual and lifetime maximums and pre-existing conditions exclusions, the introduction of the individual mandate, individual coverage expansion to age 26 for dependents, and prescribed benefit plans. The dramatic expansion of high-cost specialty medications and the continual increase in expensive life-saving treatments for all types of claims is another factor. 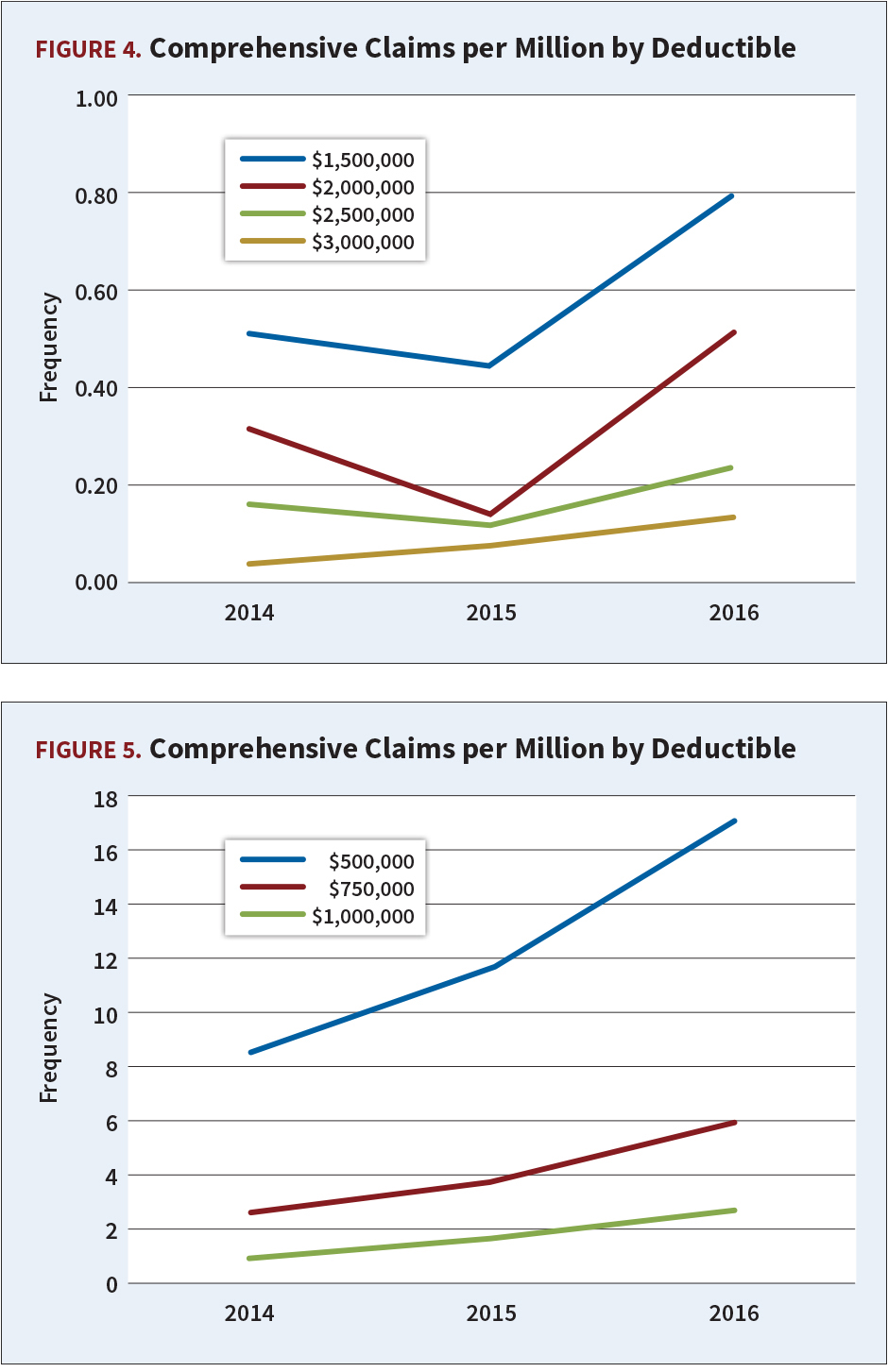 Figure 4 and Figure 5 represent trends in claim frequencies for various deductible levels. These claim trends demonstrate 50 to 100 percent increases in frequency between 2014 and 2016 at most all catastrophic claim levels, even approaching 200 percent at the $2 million level.

Figure 6 provides a view of all catastrophic claims by type of charge and market segment.[14] 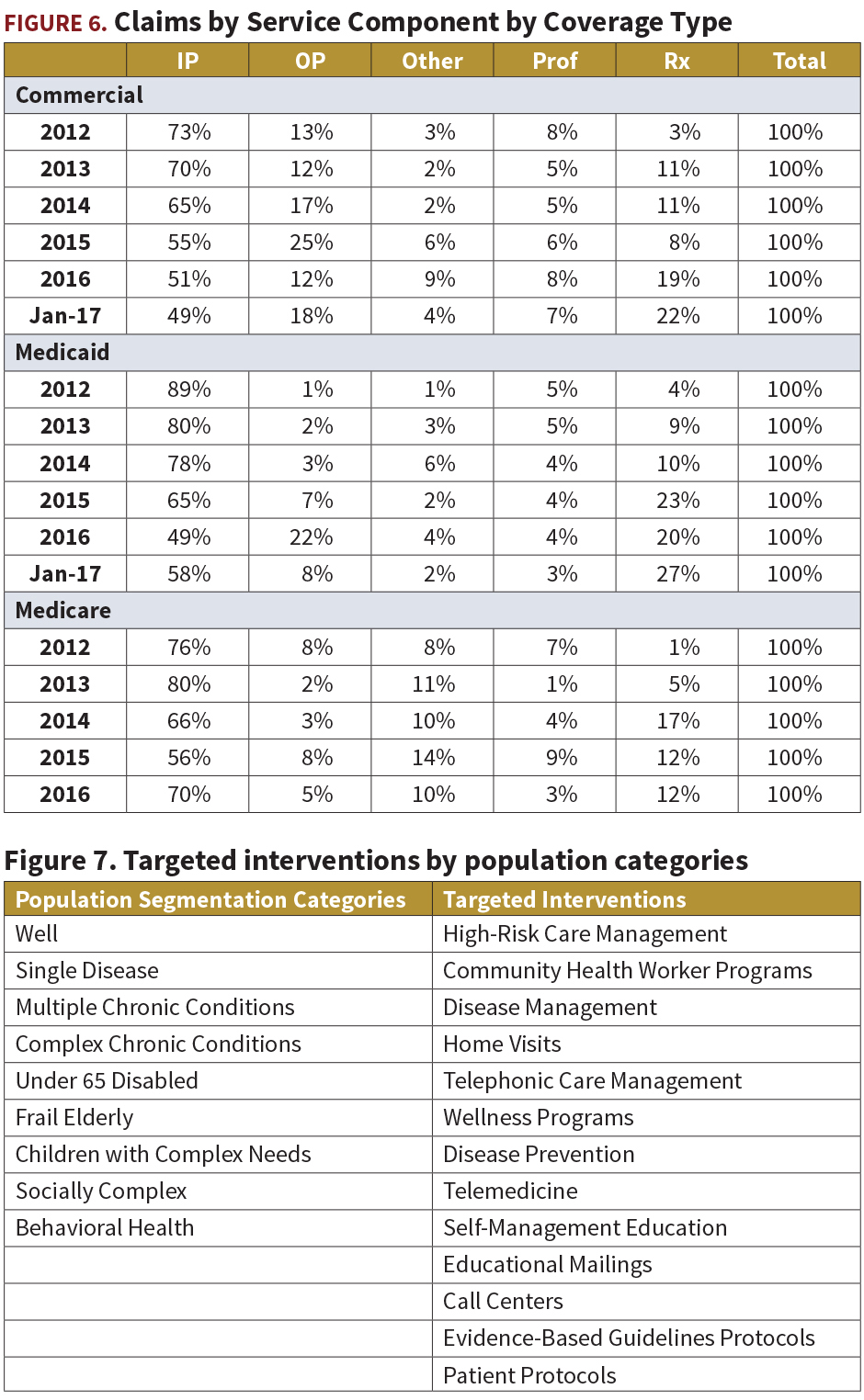 The primary observation from this table is the increasing impact drug costs (Rx) are having on catastrophic medical excess of loss claims. This is a function of the rapidly increasing frequency and cost of Rx claims as well as a shift in selected charges from in-patient only to comprehensive including drugs.

As lasers increase in frequency, reinsurance clients look to product solutions such as no new laser (NNL) products that charge an additional premium during the current coverage period to eliminate the impact of a laser on the group’s future financial considerations at renewal. Review of diagnosis is particularly import-ant because certain diagnoses are more likely to recur in the subsequent year and are important candidates for extensive, careful review of diagnosis and prognosis during the initial or renewal underwriting phase for claimants with costs exceeding $100,000 in any one year. Approximately 30 percent will repeat as large claimants in the subsequent year. Examples include chronic kidney disease, hemophilia, and large prescription drug claims. On the other hand, premature infant costs are often very severe but are less likely to recur in a subsequent coverage period. Top diseases that show up for the largest Rx claims when reviewing the specific medications include: blood clotting disorders, hereditary angioedema (swelling in various parts of the body), perinatal/infantile, and juvenile-onset hypophosphatasia (abnormal bone development) and rare diseases that require enzyme replacement.[16]

Other reinsurance options being explored to rein in specialty drug costs include benefit limitations (merely cost-shifting) and preferred provider arrangements de-signed to constrain high costs from hospital infusion suites. The plan may require pre-authorization for such services, which would allow redirection to a lower-cost facility and lower drug cost before the member has already started treatment.

Back to the Future—Population Health Management (PHM)

Besides lasering claims at the catastrophic deductible level, we believe they should still be managed from the ground up. This requires good risk management by health plans to segment their population into risk categories and target the interventions accordingly. If constructed properly, PHM is designed to mitigate catastrophic claim severity and frequency by keeping people well as along as possible and by dealing with various chronic health conditions to keep them from becoming catastrophic.

An ounce of prevention is still worth a pound of cure. Keep the member well or treat the illness before it becomes catastrophic. Health plans practicing PHM—that is, the original health maintenance organization (HMO) principles—utilize a divide-and-conquer strategy by segmenting the heterogeneous population into numerous groupings and applying targeted interventions appropriate for their given circumstances. See Figure 7.[17]

In conclusion, specialty drugs are the lead character in the play on current market trends impacting catastrophic medical claim costs. The phrase “Better Living Through Chemistry” is a variant of a DuPont advertising slogan, “Better Things for Better Living…Through Chemistry.” DuPont ad-opted it in 1935; it was their slogan until 1982 when the “Through Chemistry” part was dropped. The slogan was a harbinger of things to come in the prescription drug world in the 21st century.

LARRY JACKSON is vice president of Summit Reinsurance Services Inc. He can be reached at ljackson@summit-re.com.

MARK TROUTMAN is president of Summit Reinsurance Services Inc. He can be reached at mtroutman@summit-re.com.

[10] Optum analysis of national data from the Organ Procurement and Transplantation Network (OPTN). https://optn.transplant.hrsa.gov/data/view-data-reports/national-data/, accessed May 2018.