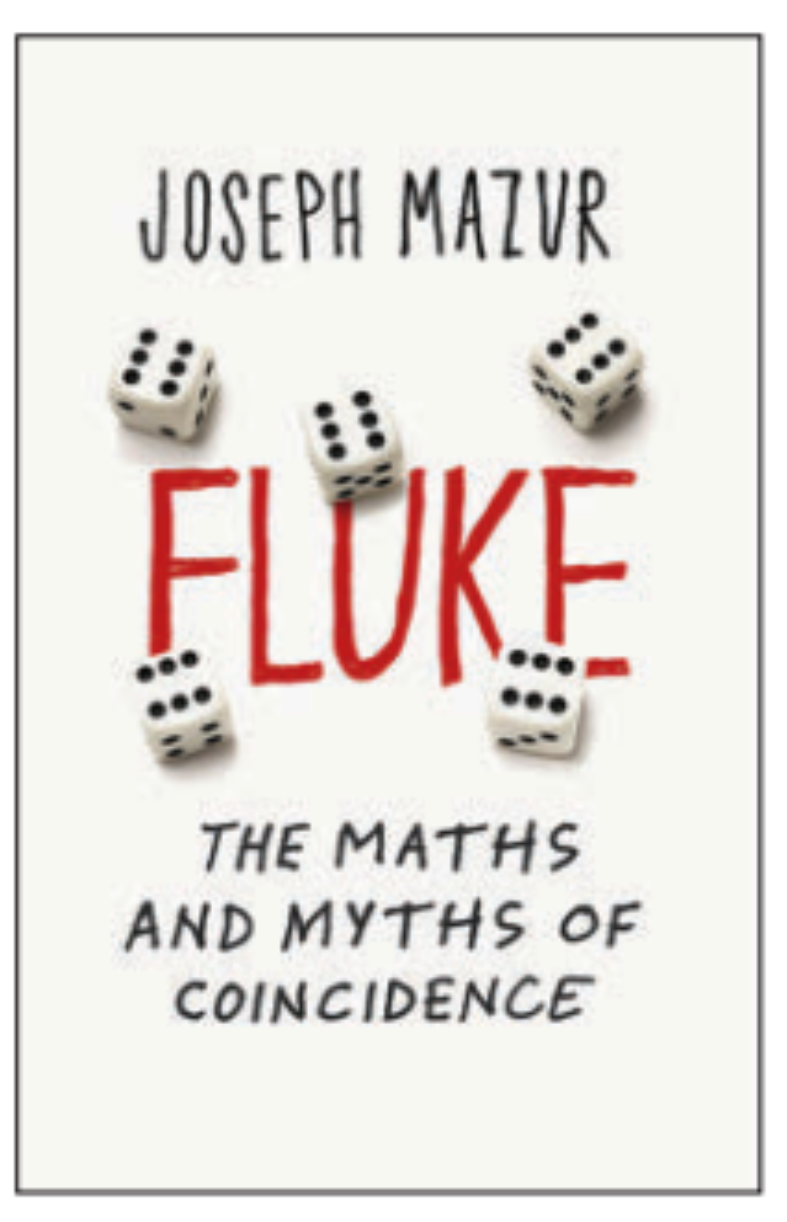 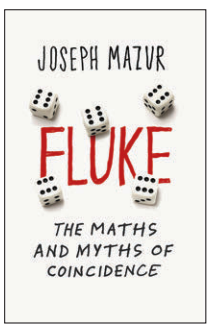 picked up Joseph Mazur’s Fluke. On the very first page of the introduction, Mazur describes how his uncle endured sessions of ECT after suffering a high school boxing injury. It seemed a fitting entry into a book with the subtitle “The Maths and Myths of Coincidence.”

Ten years old at the time, Mazur speculated on his uncle’s injury: What if he had been sick that day and hadn’t gone to school? What if his opponent had been sick? What if Jack had knocked out the other guy first? Speculations like these led to the present volume, in which he tries to apply mathematics to determine the likelihood of unlikely events. In the process, he breaks the law of large numbers into “the law of weak large numbers” and “the law of truly large numbers,” reminding us that “if there is any likelihood that something could happen, no matter how small, it’s bound to happen at some time.”

The first part of the book is the most entertaining. Here he tells 10 stories of unlikely occurrences, with intriguing titles like “The Girl from Petrovka,” “The Albino Taxi Driver,” “Plum Pudding,” and “Abe Lincoln’s Dreams.” My favorites are (surprise) the two about books. In one of these, the novelist Anne Parrish of Colorado Springs, Colo. is in Paris having lunch with her husband at Deux Magots. She leaves him to finish his wine and strolls off to browse the bookstalls along the Seine. To her delight, she comes across a book she had loved as a child in Colorado, Jack Frost and Other Stories. She buys it and rushes back to show it to her husband, reciting her tale of having owned a book of that title as she was growing up. What a coincidence! He leafs through a few pages, then hands it back, showing her the flyleaf where her name and Colorado address have been written in her childish hand. Was this a coincidence, a fluke, or serendipity? The definitions of these terms are given early on and used to distinguish events he analyzes later in the book. Other words tossed in are “improbability,” “seriality,” and “synchronicity.”

In part two, the author provides the math he believes we will need for that analysis. Early on he asks, “We have an actuarial grip on the odds of a person living past the age of x years, so what is obstructing us from measuring the odds of a miracle?” To provide the tools for such measurement, the next five chapters deal with probability in a way that I frankly found tedious and poorly proofread. (On a single page there are two formulae with plus signs where multiplication is required.) At some length we are treated to illustrations of long series of coin flips, dice tosses, cards dealt, etc. to arrive eventually at a normal curve and to illustrate the earlier maxim that improbable events happen. To quote R.A. Fisher, “The ‘one chance in a million’ will undoubtedly occur … however surprised we may be that it should occur to us.” Coincidentally—or is it a fluke?—Fisher is mentioned in a chapter devoted to suspected cause vs. coincidence or merely correlation. Fisher was skeptical that smoking caused cancer, “If … it were possible to infer that smoking cigarettes is a cause of this disease, it would be possible to infer on exactly similar grounds that inhaling cigarette smoke was a practice of considerable prophylactic value in preventing the disease, for the practice is rarer among patients with cancer.” (Too bad he’s not around to examine the climate change “hoax” assertion.)

The most entertaining of these chapters are the ones dealing with famous scientists—Pascal, Bernoulli, Cardano, Poincaré, and Galileo. Among the less familiar vignettes were descriptions of Pascal’s Triangle (each number is the sum of the two numbers above it) and the Galton Board, where balls are dropped on the ends of a set of rods and land randomly, ultimately forming a normal curve.

In part three, we return to the stories of coincidence that opened the book, but first they are classified: Unexpectedly finding what is searched for; Forgotten objects unexpectedly turning up from the past in faraway places, etc. The Paris story of the Seine bookstall and the Jack Frost book of Anne Parrish’s childhood has a quote from literary critic and all-around wag Alexander Woollcott, who says that he was “more than half disposed to believe that when the oblivious Anne Parrish crossed the street to that bookstall, somewhere in fathomless space a star chuckled—chuckled and skipped in its course.”

But we are not dealing with stars but probabilities, and here they are (see the book for the rationale): likelihood of Parrish traveling to Paris that summer: 0.1; likelihood of visiting the bookstalls: 0.3; likelihood that the book would be there: 0.01. He writes, “So the probability of such a story happening would be something like p = 0.1 x 0.3 x 0.01=0.0003, the odds in favour of its happening are 3331 to 1.” He admits that “hidden variables” (the subject of an earlier chapter) might change the probability but not “by more than 1/10,000, and therefore the odds … remain slightly better than the odds being dealt a poker hand of four of a kind.”

Another of the listed coincidences is that of a woman hailing a cab in Miami and having the same albino taxi driver she had in Chicago three years earlier. Skipping over the details, here is the final calculation of the probability. “That puts the woman’s chances … greater than 20/15,327=0.013 and less than 40/15,327=0.026. The odds are between 75 to 1 and 36 to 1. Not bad!”

Well, not good, I’m afraid, since the decimal point is in the wrong place.

The author admits defeat when he looks at “Plum Pudding” and a couple of other listed coincidences, but he goes to town on the last, which is that of one Joan Ginther winning four Texas lotteries over a period of 18 years. Rather than tackling that scenario directly, he walks through some preliminary calculations, concluding that the odds of a person (not a designated person) in the United States (not just Texas) will win two lotteries in five years are better than even. Moving from the United States to the whole world, he derives the probability of a person winning the jackpot twice in two years as 0.97, or near certainty. From this we return to Ginther’s four wins over 18 years and are told that “in that time span, the probability of some person winning four jackpots somewhere in the world is extremely close to 1.”

Part 4 is titled “Head Scratchers” and begins with a confession that “[t]here are coincidences that completely escape analysis.” So we move from the “Math” of the subtitle to the “Myth.” Five essays deal with DNA, the accidental discovery of X-rays, the acts of a rogue trader, psychic powers or extrasensory perception (ESP), and the intentional coincidences in literature.

The DNA essay reveals the uncertainty inherent in DNA matches, either through questionable lab work (as was convincing to the O.J. Simpson jury) or, more scientifically, through the analysis of too few short DNA sequences called “short tandem repeats,” or STRs. The legal profession has settled on the number 13 as the minimum for matching STRs to be accepted in evidence. The essay is interesting for the information on the human genome, for the history of actual court cases involving DNA, and for the personal stories of victims and exonerations of the innocent. The pages on exonerations are replete with statistics on incarcerations: “[A]pproximately 2.3 million persons are being held in federal and state prisons. … [N]early 37% … are African American. … It means that 1 in 100 American adults are behind bars, leaving 1 child in 28 with a parent behind bars.” These depressing figures seem to have triggered the author’s emotions, for they lead to what might be considered a rant: “[T]he United States leads the world in per capita documented incarceration rates, behind Russia and Rwanda … with one-quarter of the world’s total prison population.” These numbers touch a nerve until they are called into question by some less-thanprecise recitations: “In 2014, 515 of the 1,409 exonerations in the United States were of prisoners on death row. That’s a staggering rate of 16.8 percent!” Huh? Solving for the denominator of that percent figure, we get 3,070, which happens to be the number of inmates then on death row—a fact we learn a page later. The balance of the paragraph is confounding. “Since 1976 there have been 1,386 executions in the United States and just 144 exonerations of death row verdicts. That means since 1976 almost 1 in 10 people should not have been sent to death row.”

Regardless of one’s feelings toward executions and our prison policies in general, one wonders what all this has to do with flukes and coincidence,aside from a DNA match occurring because of matching too few STRs.

“Discovery” is the title of an absorbing chapter where chance, flukes, and coincidence contributed to science. X-rays were discovered when Wilhelm Röntgen accidentally put his hand between a cathode ray tube and the screen where the rays were focused. The name comes from the letter “X” being the classic symbol for an unknown. Mazur describes other contributions of chance to such discoveries as penicillin (mold on a Petri dish), quinine (a malaria victim drinking water from a spot near a cinchona tree), insulin (flies on a dog’s pancreas), etc.—all echoing Louis Pasteur’s famous quotation, “Chance favors the prepared mind.”

The chapter titled “Risk” attributes coincidence to market events—London Underground bombings, for example, causing the Financial Times Stock Exchange 100 (the FTSE) to fall precipitously. That’s not the coincidence, but a trade made by one Jerome Kerviel in France was highly profitable because of the bombings. Unfortunately, he went on trading, with disastrous results. With the subject of risk, Mazur has wandered into actuarial territory, and it is unfamiliar terrain. About earthquakes and other rare events, “We know they will happen, but not when.” Isn’t that what insurance is all about? He quite rightly agrees that “we can assess the risk that the worst might happen.”

The psychic power chapter chronicles events that are attributed to ESP. He points out that such events are treated with appropriate skepticism in most circles, yet one anecdote tells of a Brazilian court accepting a “letter from the dead” as evidence sufficient to acquit the murderers. A good summary of so-called psychic events is stated as, “We see coincidence as events that are mysteriously fated by some deeply significant design. We suspect a correlation between two complex phenomena. The real problem is that we naturally tend to make connections were [sic] there are none.” A personal example: At the moment of the death of one of my sisters, her son-in-law, sitting in a neighboring room looking at a family album, saw a page flip over by itself to a photo of her already deceased husband; another sister, sitting in her yard, had a chickadee alight on her shoulder.

Two other quotations will suffice to end this review:

“Our thoughts and actions seem to be primed by chains of experiences, and yet fate has its odd ways of stepping in to tweak and perturb the balance.”

“I leave it to you to judge it a coincidence, a fluke, or divine intervention.”

ARDIAN GILL, a member of the Academy and a fellow of the Society of Actuaries, is the author of The River Is Mine, a historical novel, and of a recently published children’s book, The Blue Moose. In his past life, Gill was chief actuary at the Mutual Life Insurance Co. of New York, a partner at Tillinghast, and co-founder of Gill and Roeser Inc., reinsurance intermediaries.