I’ve been giving talks every May for the past five years to a group of my friends and some senior citizens. I haven’t given a talk on an actuarial topic to this group before, so I decided it was time to do so—but what topic? I decided to research and discuss the Avoca Cemetery in Oakfield, Wisc., for several reasons. This project provided a remembrance to my parents-in-law, who were buried there; it satisfied my curiosity about cemeteries; and it allowed me to do some actuarial exercises, including developing mortality probability distributions.

For family and friends, a cemetery provides a place to go to connect in their own way with those they knew. The more I looked around the Avoca Cemetery, the more I wanted to learn about other people buried there. I gathered information from the gravestones, received a history of the cemetery, looked at some public records of news articles and obituaries, and did some research on the internet. The readable gravestones had information about the deceased, especially their birth and death date. They showed stories, including symbols representing activities that were important to them, or words that comforted them or their families. Some gravestones identified relationships with others buried nearby.

The Avoca Cemetery is about 8 miles from Fond du Lac, Wisc. My wife, Mary Gau, and I took a break from a family reunion in September 2017 and spent two days photographing the gravestones—we may have missed some, but our goal was to capture them all. I gathered information from readable gravestones in the cemetery. I found that the average lifespan (or life expectancy) from birth to death was 64.3 years. The earliest birth year was Hanna Bull in about 1772 (the gravestone read “Died Mar. 18, 1861 [AG]E. 88 ys. 7 ms.”). The oldest person buried was Martha Hodge Blaeser (1882-1988) who died at about age 106. The longest marriage, with known wedding date, was over 74 years between Bennett and Ethel Bird from Sept. 19, 1923. through Ethel’s death in 1998. My results came from about 2,100 gravestones and 2,850 people buried there. I used the information on the gravestones to develop mortality tables and life expectancies.

Actuarial Analysis and Other Statistics

I had to make some assumptions. I excluded unreadable stones. I assumed a July 1 birth or death date if only the year was provided; the error was ± 1 year from this assumption (e.g., if actual birth was Dec. 31 and actual death was Jan. 1, I would be too high by almost 1 year). Because the error is positive and negative, I would think it would likely balance out. I assumed mid-month to complete a date, if the rest of the date was known. There were a few gravestones where the birth and death dates were readable but the names weren’t, so the gender was left blank. Otherwise, the gender was based on the first name or other relationship information (e.g., wife, father, etc.). I excluded stones for those still living or otherwise incomplete birth and death years. I used age last birthday for the mortality tables. Marriages were sometimes highlighted with a marriage date. Other times, based on maiden name, the birth and/or death years on a gravestone, I assumed that two people etched in the same or nearby stones were married. Ninety-seven gravestones used the phrase “his wife” or “wife of” without its counterpart “her husband” or “husband of.”

Avoca Cemetery’s life expectancies and the number of people by gender are given in Table 1 for those who died before 1900, died between 1900 and 1950, and died 1950 and after. AAD means average age at death.

Table 2 provides national life expectancies for comparison. The source for 1850 was Massachusetts only;[i] for 1900 onward I used the U.S. population.[ii]

The life expectancies at the Avoca Cemetery were in line with national amounts for all time periods except those who died before 1900. For those dying before 1900, Avoca’s life expectancies were slightly below the national average for 1850, and we might have expected them to be between the 1850 and 1900 national life expectancies. I speculate there were two reasons for this trend: First, the sample size for Avoca was very small (about 170 people), so non-randomness occurred; and second, there might have been epidemiological reasons, beyond the scope of this article, that could have caused central Wisconsin to have worse mortality than Massachusetts (the source for the 1850 “national” life expectancy).

Table 3 shows the life expectancies of those who married vs. those who didn’t marry. In looking at the married/unmarried expectancies, a fallacy or bias error would occur if I measured everyone’s lifetime from birth; then married people would always live longer than everyone else. The reason for the error would be because married people would be assured to live at least until the age at which their marriage began. Therefore, married people would likely not begin to die before age 20 or so, while the general population could die at younger ages. For a less biased conclusion, I eliminated those who died before age 20.

Graph 2 compares Avoca’s cumulative mortality distribution based on when the death occurred (i.e., before 1900, 1900-1949, and 1950 and after). As expected, Avoca’s deaths occurred at much younger ages for those who died further in the past than those who died more recently.

The Appendix provides the Avoca Cemetery’s age last birthday distributions at death for readable gravestones with complete birth/death information. These distributions were used to develop graphs 1 and 2.

Finally, I’m suggesting that other actuaries or actuarial students may wish to study mortality experience from other cemeteries—perhaps a new source of information could be added to the historical record of communities throughout the world. The more I looked, the more I found at the Avoca Cemetery. 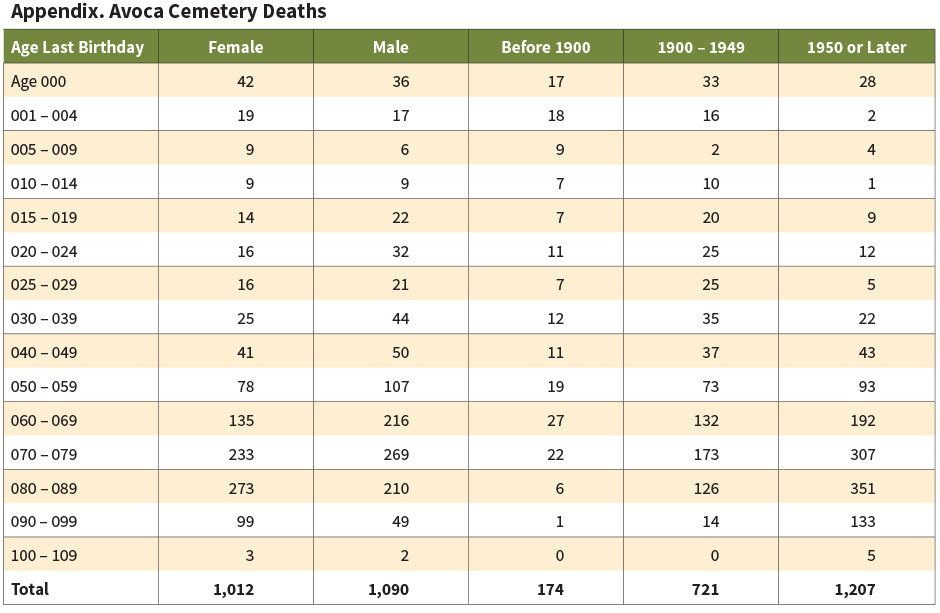 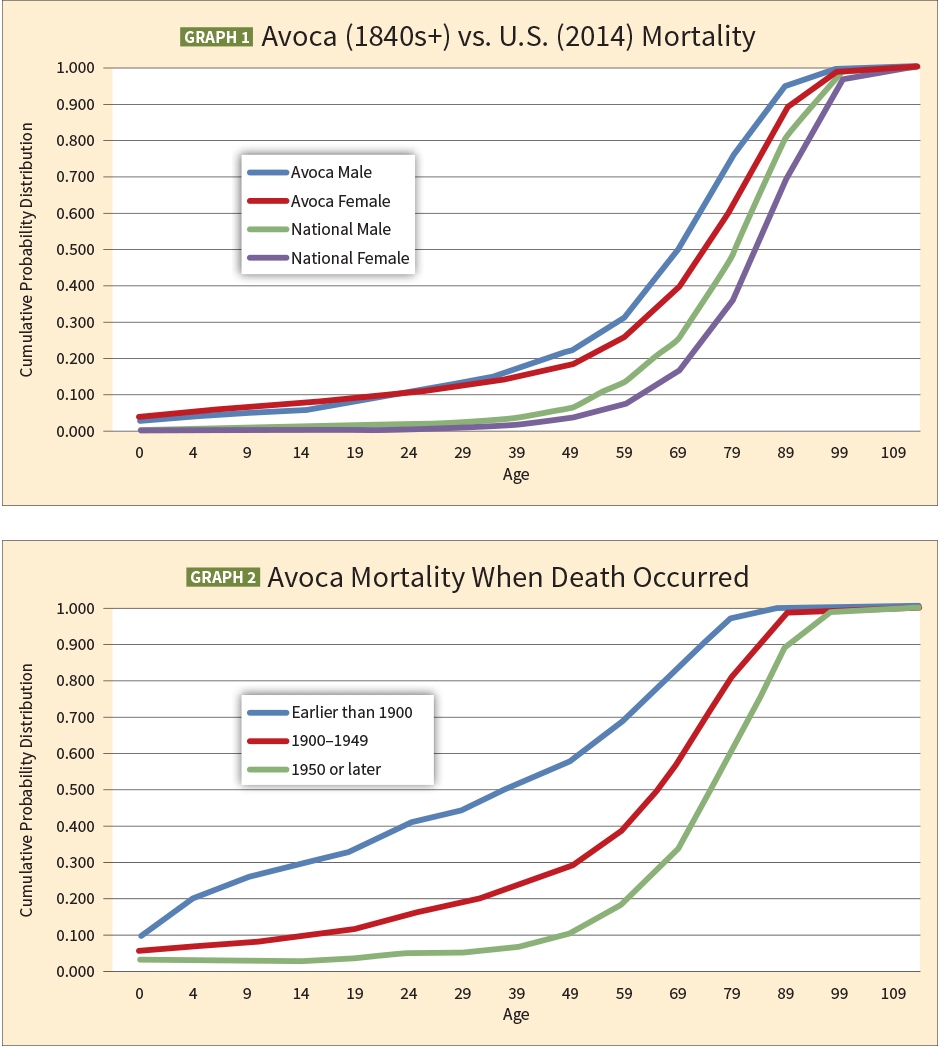 [i] White and nonwhite persons combined, the latter making up less than 1 percent of the total. U.S. Dept. of Commerce, Bureau of the Census, Historical Statistics of the United States.