Tales of a Sixth-Grade Actuary 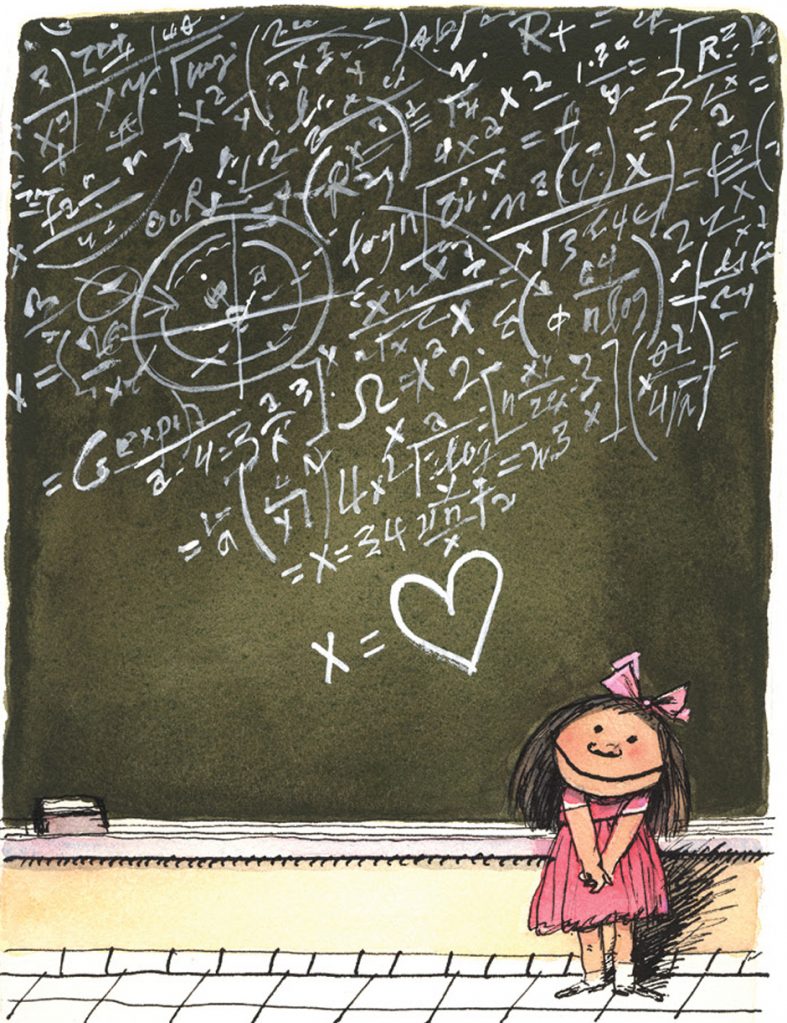 I was an awkward sixth-grader. On the first day of school, my bus never showed up, so I burst into homeroom late and sweaty with a panicked look on my face. Standing there in my puff-sleeved white blouse, pink-and-white gingham pleated skirt, and clogs, I was eyed by a sea of kids wearing Izod shirts and Jordache jeans. (It was the 1980s, people.) In the real-life drama that is middle school, I was quickly cast as a “nobody,” an “extra.”

While my fashion sense may not have been on point, I was academically strong, and I set about flying under the radar and just trying to do the best I could in all my classes. My favorite class was math, but I was one of the quiet students who didn’t feel comfortable actively participating. A fellow student—let’s call her Nicole—had a fancy accountant father who liked to teach her fancy math tricks. Every so often she was allowed to perform these math tricks in front of the class. Fancy Nicole loved to wow everyone with her mathematical prowess, grinning smugly at us when we couldn’t figure out how she did her magic.

One day she was up there doing her shtick, this time asking volunteers to provide a three-digit number and promising that, with a certain mathematical manipulation, she would be able to make it equal the same new number every single time. Rebecca was the first victim—er, volunteer—who offered up a number: 642. Here is how Fancy Nicole’s trick worked: She took the number (642), reversed the digits (246), subtracted the smaller from the larger (642 – 246 = 396), then added back the reverse of those digits (396 + 693) to get 1,089. While that didn’t initially spark much excitement, it got more interesting when she used a different three-digit number and again calculated a result of 1,089. After the third or fourth example, the class was mystified.

As I sat, pensive, at my desk, I suddenly felt an almost physical lightbulb shine atop my head when I realized her trick would not work with particular types of numbers. If I presented her with a number that was a palindrome, then when she subtracted it from the reverse of its digits, she’d get zero, rendering her trick undoable. When she asked for another volunteer, I tentatively raised my hand. She called on me and I shyly offered, “909.” Mr. Joy, our aptly named kind and witty math teacher, shot me a sideways glance with a twinkle in his eye and whispered, “You got ’er!” Fancy Nicole tried in vain to make her little trick work with my number. Fancy Nicole was confused. Fancy Nicole was annoyed. For just a moment I was the smug one. (While I acknowledge that smugness is not an aspirational trait, I will also freely admit that my 11-year-old self found it a little bit satisfying.)

Mr. Joy had me come up to the blackboard, and he helped me demonstrate why the trick didn’t work, to my simultaneous embarrassment and pride. At that moment I felt a small sense of power for the first time that year. I felt the pride of being able to look at a problem, decipher it, and explain to others how it worked in a way that everyone could understand.

Over the next several years I worked on overcoming my timidity and challenged myself to push outside my comfort zone—to participate more, take on leadership roles, be an active team member. (I also made my mom take me to T.J.Maxx to get some cooler clothes.) I took honors classes in high school. I realized that the feeling I had in that sixth-grade classroom wasn’t fleeting; I enjoyed math and problem-solving, I enjoyed learning and mastering new concepts, and I enjoyed working with others. I continued to focus on learning how to analyze complex problems as a Math and Economics major in college, and I discovered the actuarial career in the process.

We grow up through the course of our careers, continually honing our skills, becoming better analysts and communicators, and improving our professional presence. But at least for me there’s still that unsure sixth-grader in there somewhere, and I’ve found that calling on my actuarial competencies is what gets me through those times of uncertainty. The job of a consulting actuary is to produce sound, unbiased analyses and explain the results to clients. But it’s so much more than that.

It’s building consensus when a client doesn’t like or agree with the results, a delicate balance of preserving the integrity of the work product while also maintaining an important professional relationship. It’s taking the time to delve deep into a piece of legislation, despite your unfamiliarity with the legalese, to get yourself comfortable on how to counsel your client on its impact.

We are often pushed outside our comfort zone, and while those times can be uncomfortable, they are also precisely the moments when we capture that feeling of power and pride I felt in that sixth-grade classroom. Being able to assess a situation we haven’t seen before, call on others for help or expertise, devise a way to analyze the problem, and present the solution in a constructive, understandable manner are all powerful tools—and when we use them successfully, the sense of accomplishment makes all the hard work worthwhile.

Recently a job candidate asked me why I became an actuary, and this anecdote, which I hadn’t thought about in years, popped into my mind. Little did I know at the time, but that day in sixth grade was formative for me in developing the skills and competencies I’d need to succeed as an actuary. So thank you Mr. Joy, and thank you Fancy Nicole, for showing me the power of math and giving me the confidence to pursue a path toward my professional goal.

JOANNE FONTANA, MAAA, FSA, is a consulting actuary with Milliman.