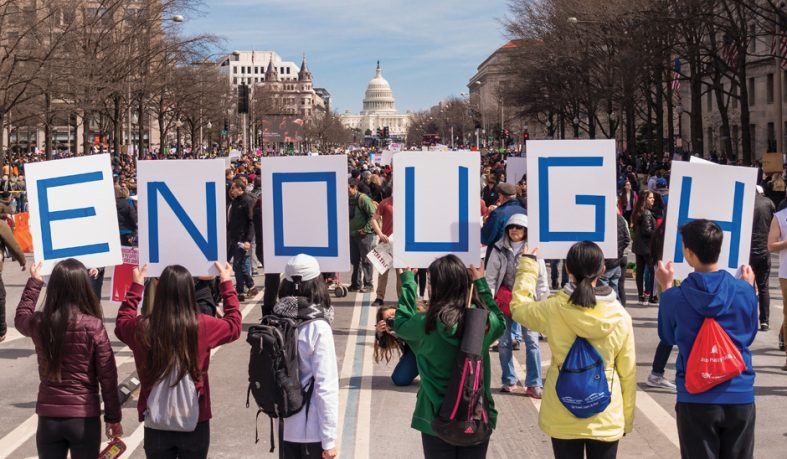 “I’m going to the March for Our Lives march in Washington, D.C. Do you want to come with me?” Ray asked in his heavy Brooklyn accent. He hunts game birds and deer, eats or donates what he shoots, and owns several handguns and rifles. Ray said that he is tired of words and had to respond to the Florida school shooting more effectively than just wringing his hands yet again. I paused for a moment and replied, “I’m there.”

We drove eight hours on Thursday, arriving in the capital around dinner time and ate in one of the District’s many fine tapas restaurants. Ray had never been to Washington, D.C., and wanted to see the nation’s monuments after dinner. We started at the Washington Monument and after walking through the World War II Memorial, went to the Vietnam Veterans Memorial. Lights in the sidewalk shone on the black granite, illuminating the gifts left by loved ones and strangers. It’s a short walk from there to the Lincoln Memorial, and the majestic statue of our greatest president stunned us. The slightly larger-than-life-size statues of the Korean War Veterans Memorial seemed eerie in the dusk. We viewed the classical Jefferson Memorial lit up across the Tidal Basin as we rode in silence to our hotels.

We spent yesterday at Ford’s Theatre and the Smithsonian Air and Space Museum. These museum visits allowed Ray to take a break occasionally so he could remove his prosthetic leg and relieve the pain. Tomorrow will be a long day of walking and standing for him.

The sky is clear and sunny today, but it’s still cold in the concrete canyon shadows. We are at the march and people are everywhere—LOTS of them. The speeches begin. Few speakers make partisan barbs, but I suspect isolated snippets will appear on cable and TV shows. One girl relates that she learned an active shooter drill before she learned to read. Several speakers vividly portray the fear and trauma of their generation. They direct their anger to any politician of either party who obstructs their pursuit of safe schools.

But gun violence exists outside of schools too. Several speakers are relating heartbreaking stories about a family member who no longer sits at the kitchen table because they were murdered with a gun. I see a woman in the crowd holding a sign, “A gun killed my daughter.” She stands silently, bearing witness, while a sea of people walk around her. For me, the father of two daughters, this is the most powerful moment of the march. I don’t need a camera to capture this image forever.

The speakers all have a common theme: Never Again, Enough Is Enough, and Register to Vote. They emphasize engaging families, friends, and neighbors in their campaign, and announce peaceful protests scheduled for this summer and fall. I’m listening to 12-, 15- and 17-year-old speakers whose passionate oratory is well beyond their years. This generation seems so organized and resolute that they scare me to pieces.

Emma Gonzalez steps to the podium and begins speaking, but now she has stopped. She stares straight ahead, silent and unblinking for what feels like an eternity. Now she tells us that she began speaking six minutes and 20 seconds ago, the length of time that the shooter killed 17 classmates and friends. Six minutes and 20 seconds must have seemed like an eternity to anyone who was at the school that day.

The speeches have concluded and we begin walking up Pennsylvania Avenue. I notice counter-protesters in front of the FBI Building who are deep into discussion with some marchers. We stop to observe and listen. Both sides express their deeply held beliefs, and take turns talking. No one shouts or talks over someone else. I’m surprised when one person holds out their hand and the other one shakes it. I’m even more surprised when they hug each other. The march continues and it ends anticlimactically at the White House.

I’m home now, with time to reflect on the experiences of the last few days. Each mass shooting over the years has been a horrific, senseless tragedy, and changes survivors’ and family members’ lives forever. But sad to say, the frequency of these events has relegated these unspeakable tragedies to “old news” in the public’s attention span after a sufficient passage of time.

I sense this time is different.

BOB RIETZ is a retired pension actuary who lives near Asheville, N.C.