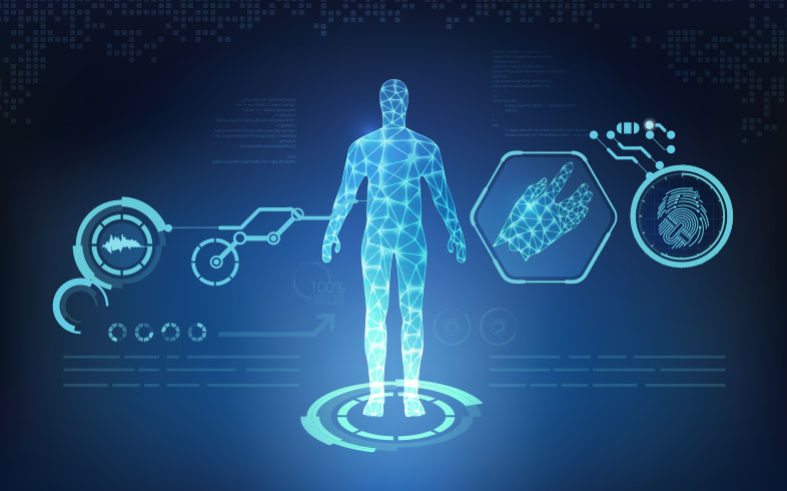 By James A. Palmier

There was over $20.8 trillion of life insurance in force in the United States in 2015 (American Council of Life Insurers, 2016). Many of these policies were issued by insurance carriers whose medical directors, actuaries, and underwriters are experienced in evaluating, underwriting, and managing risk.

Risk is determined by the overall current and likely future health of the prospective applicant and is translated into what the insurance carrier will charge in premiums to accept the applicant’s overall risk. Most life, disability, and long-term care insurance companies will focus on medical history, family history, biometrics, and a critical assessment of the applicant’s clinical laboratory. Additional tests like EKG, stress testing, cognitive function testing, and others will often be ordered based on age or past medical history.

This article will explore the past, present, and future of clinical laboratory and biometric testing as they apply to life, disability, and long-term care insurance underwriting. 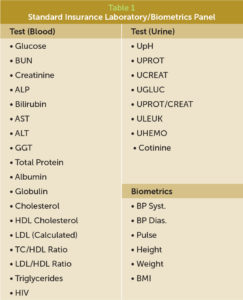 Insurance policies were generally issued with little or no enhanced clinical laboratory testing up until the AIDS/HIV epidemic in the early 1980s. Until then, insurance carriers often had their agents or brokers send the home office a urine specimen to be quickly analyzed via dipstick. With the advent of HIV, though, insurance companies’ mortality, morbidity, and claims risk increased greatly, and standard practice changed to test an applicant’s blood for the HIV virus in addition to routine urine testing. Because blood was now being tested, insurance companies’ medical directors, actuaries, and underwriters looked for a group of tests in addition to HIV that correlated with increased morbidity and mortality in the general population seeking life, disability, and long-term care insurance—and preferably at low cost. The basic laboratory panel currently used by most insurance carriers is listed in Table 1. Blood and urine is most often drawn in the field (i.e., the applicant’s home) to make it easier and more convenient for applicants.

Based on age and the clinical results, additional reflex tests may be ordered. Reflex tests are tests that are automatically ordered based on the predetermined levels of another test. The most often utilized reflex tests are found in Table 2.

The most-used endocrine biomarkers in life, disability, and long-term care insurance assessment are listed in Table 3.

Hemoglobin A1C measures the average serum glucose level for the preceding two to three months of an applicant. It is one of the gold standards in diabetes diagnostic testing and monitoring. It is formed when glucose in the blood binds to hemoglobin to form a glycated hemoglobin complex. The American Diabetes Association recommends using A1C testing to screen for for both pre-diabetes (A1C 5.7–6.4%) and diabetes (> 6.5%).

Low hemoglobin A1C may also be predictor for all-cause mortality, even in adults without diabetes (Carson, 2010).

Fructosamine is another marker for glycemia and measures an individual’s glycemic control over the past two to three weeks. It is not often used anymore because of the availability of hemoglobin A1C. It has been found to be associated with cardiovascular mortality when elevated (Browner, 1999) and with cancer mortality when at decreased levels (Palmier, 2012).

The most-used hepatic biomarkers in life, disability, and long-term care insurance assessment are listed in Table 4.

ALT, AST, and bilirubin are the most common tests to diagnose and to monitor liver disease in clinical practice. However, in life, disability, and long-term care insurance medical underwriting, gamma-glutamyl transferase (GGT) is a very important biomarker used to predict increased mortality (Stojakovic, 2010; Kazemi-Shirazi, 2007; Hernaez, 2013). Hepatitis B and hepatitis C testing is most often reflexed off of general liver function testing (AST, ALT, ALP, bilirubin, or GGT). However, some carriers screen all applicants for the hepatitis B surface antigen and the hepatitis C antibody.

Serum carbohydrate-deficient transferrin (CDT) is used in the diagnosis of chronic alcohol abuse with ethanol consumptions of over 50 g/day over two to three weeks (Arndt, 2001; Hock, 2005). It has a higher specificity for diagnosing chronic alcohol abuse than LFTs alone. CDT elevation can also be caused by many non-alcohol-related disorders like pregnancy or alteration of iron homeostatsis.

The most-used cardiovascular biomarkers in life, disability, and long-term care insurance assessment are listed in Table 5.

The lipid panel consisting of total cholesterol and its fractions, as well as triglycerides, continues to be widely used in both clinical and life insurance medicine.

N-terminal Pro B-type naturetic peptide (NTproBNP or just ProBNP) is a chemical released into the blood in increased amounts when the heart muscle, specifically the left ventricle, is stressed. Conditions such as heart failure, left ventricular dysfunction, and coronary artery disease can cause elevations of NTproBNP. ProBNP is released from the heart muscle in response to increasing pressures. It is cleaved into two parts. BNP is the biologically active peptide that assists in the regulation of body salts and fluids. BNP is short-lived, with a biologic half-life of 18 minutes. NTproBNP, the remaining peptide, has been shown to be stable.

NTproBNP levels correlate closely with the severity of left ventricular dysfunction and congestive heart failure and can be used to monitor therapy. The test has been approved by the U.S. Food and Drug Administration for risk assessment of future cardiac events for people with stable coronary disease. One clinical study found NTproBNP to be the most predictive indicator of overall mortality in patients with stable coronary disease (Kragelund, 2005). Another study found that patients with known coronary artery disease who had NTproBNP levels in the highest 25% were four times more likely to have subsequent coronary events as those with levels in the lowest 25%. (Schnabel 2006)

NTproBNP has strong predictive characteristics in testing the elderly and community-dwelling adults. A population-based study of 764 participants aged 50-89 years revealed that those with levels greater than the 80th percentile had twice the risk of mortality over the five years of follow-up (Kistop, 2005).

Serum proteins, specifically albumin, continue to an important predictor of morbidity, as well as all-cause and cardiovascular mortality (Herselman, 2010; Mehrota, 2011).

Albumin represents 55-65% of the total plasma proteins. Normally, most of the albumin in the glomerular filtrate is resorbed, but small amounts may be found in the urine.

The most-used renal biomarkers in life, disability, and long-term care insurance assessment are listed in Table 7.

Urinary albumin is one of the most important biomarkers for glomerular dysfunction. In the early stages of renal vascular disease, albuminuria usually precedes frank proteinuria. Slightly elevated albumin excretion in urine is called microalbuminuria. In spite of the name, the albumin is identical to serum albumin. It is of particular importance in the early diagnosis of diabetic nephropathy that develops in nearly 40% of people with diabetes. Microalbuminuria is also a forerunner of renal failure in people with hypertension and polycystic kidney disease.

In people with diabetes or hypertension, elevated albuminuria is independently associated with an increased risk of all-cause mortality, cardiovascular morbidity and mortality, and renal insufficiency (Duddleston, 2004; Yuyan, 2004). The Kidney Disease: Improving Global Outcomes (KDIGO) 2012 Clinical Practice Guideline for the Evaluation and Management of Chronic Kidney Disease (CKD) recommends that CKD be classified based on cause, GFR category, and albuminuria. The practice guideline strongly recommends that albuminuria be reported as urine albumin-to-creatinine ratio (ACR) for greater accuracy.

The most-used oncology biomarkers in life, disability, and long-term care insurance assessment are listed in Table 8.

Prostate-specific antigen is a protein produced by the prostate gland. The blood level is often elevated in men with prostate cancer. It can also be mildly elevated in benign conditions such as prostatitis and benign prostatic hyperplasia. Most life, disability, and long-term care insurance companies continue to use PSA testing in evaluating overall risk in male applicants.

Smoking continues to be one of the greatest morbidity and mortality risks to applicants and a major financial risk to insurance companies that issue life, disability, and long-term care policies. Most of these insurance companies have an applicant’s urine tested for cotinine, a breakdown product of nicotine, to accurately assess the smoking status of their applicants.

Life, disability, and long-term care insurance companies continue to evaluate health and mortality risks of their applicants during underwriting prior to any issue of a policy. These companies are looking for laboratory and biometric testing that provides insightful and cost-effective health risk information to accurately project future applicant costs in relation to the premium they receive. The overall uniformity of the laboratory and biometric tests ordered on applicants by most insurance companies shows the risk assessment value received by this type of testing.

Some of the newer clinical laboratory tests, like NTproBNP, can assess left ventricular dysfunction and cardiac risk in populations with increased risk factors, as well as older populations. Historically used as a monitoring biomarker for patients with congestive heart failure, NTproBNP is now being utilized to screen general populations for cardiac disease.

Even though most health insurers do not currently individually underwrite individuals prior to issuing policies, they do want to effectively manage their members with increased morbidity and mortality risks. In this regard, many of the risks that are assessed by the life, disability, and long-term care insurance companies may be helpful for health insurers as well.

JAMES A. PALMIER, MD, is vice president and medical director, Insurance and Employer Services, at ExamOne.

“Association of Hemoglobin A1c with Cardiovascular Disease and Mortality in Adults: The European Prospective Investigation into Cancer in Norfolk”; Ann Intern Med.; 2004.

“Association between serum fructosamine and mortality in elderly women: the study of osteoporotic fractures”; Am J Epidemiol; 1999.

“Laboratory and Biometric Predictors of Cancer-Related Mortality in an Insured Population”; J of Insurance Medicine; 2012.

“Gamma Glutamyltransferase and Long Term Survival: Is it Just the Liver ?”; Clinical Chemistry; 2007.

“Carbohydrate-deficient Transferrin as a Marker of Chronic Alcohol Abuse: A Critical Review of Preanalysis, Analysis, and Interpretation”; Clinical Chemistry; 2001.

“B-Type Natriuretic Peptide and the Risk of Cardiovascular Events and Death in Patients With Stable Angina”; J Am Coll Cardiol; 2006.

“Relationship between serum protein and mortality in adults on long-term hemodialysis: exhaustive review and meta-analysis”; Nutrition; 2010.

“Serum Albumin as a Predictor of Mortality in Peritoneal Dialysis: Comparisons With Hemodialysis”; American Journal of Kidney Diseases; 2011.

“Proteinuria as a Mortality Risk”; Journal of Insurance Medicine; 2004.

“Differential improvement in survival among patients with AIDS after the introduction of HAART”, AIDS Care; 2007.